L&CBER replica no. 7 back out on the road

2016 has well and truly got underway for Llandudno and Colywn Bay Electric Railway replica no. 7 with its first public appearance taking place at the annual 1940s festival in Colwyn Bay over the weekend of 16th and 17th April. And preparations are also underway for its next appearance which should be at the Llandudno Transport Festival and Victoria Extravaganza over the May Day Bank Holiday weekend (30th April to 2nd May).

Over the winter the vintage Matador lorry which is used to haul no. 7 around the area has undergone major maintenance allowing it to continue its vital role whilst no. 7 itself is currently undergoing a repaint. During the 40s festival no. 7 was still mid-repaint but some of the older visitors to the event commented that it actually looked more typical of how the trams actually were in the middle of the war period! The upper deck seats have currently been removed along with the safety mesh to facilitate more work and painting to take place.

Moving on and no. 7’s next appearance will be at the Transport Festival and Victoria Extravaganza over the May Day Bank Holiday weekend between Saturday 30th April and Monday 2nd May. Unfortunately it will not be possible for the tram to undertake a hauled run along the former trackbed as the fields are already sodden due to recent heavy rain (the hauled run had to be cancelled last year for the same reason). However the Llandudno and Colywn Bay Electric Railway Society are looking at various options to make the 2016 visit more interesting. If you are in North Wales over the weekend the L&CBERS would love to see you! 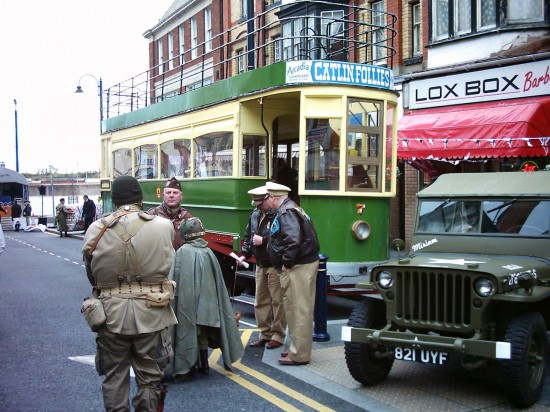 7 is seen here during the 40s event in Colwyn Bay including re-enactors. (Photograph by John Bird)