We head back to Croydon Tramlink for today’s Picture in Time image for a view of another of the early all over adverts carried by the trams with a design for Nescafe on 2533.

2533 was the fourth of the Bombardier built CR4000s to be delivered to Croydon Tramlink’s Therapia Lane Depot arriving there on Monday 16th November 1998. However it already been in the UK for over two weeks by that stage as it had been on display at the NEC Birmingham on the Bombardier Transportation stand during an industry event with photographic evidence existing of this on 1st November 1998. Originally delivered in the Red and White standard fleet livery 2533 was to receive the Nescafe advertising vinyls in September 1999 – ahead of the opening of the line. Today 2533 is still operating in Croydon but can today be seen in the new fleet livery of Lime Green, White and Blue.

This photo shows 2533 in 2000 having just left Harrington Road on its way to Beckenham Junction. It is waiting for the other CR4000 to come off the Beckenham branch with much of this line being single line. 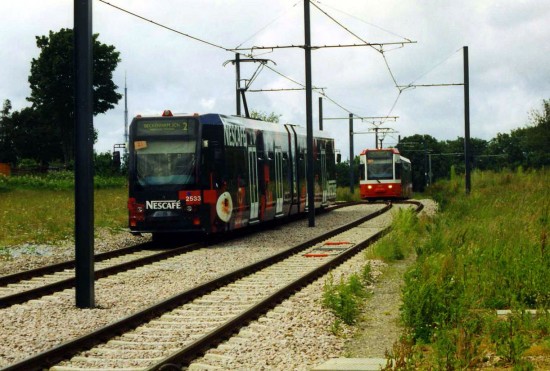