2005 arrived in Manchester on 28th September 1999 but whereas all the other members of the T68 fleet entered service in December of the same year it was to be 7th January 2000 before it got to carry passengers having been used as a source of spares for the others. On 6th November 2002 it became the first T68A to be used on the Altrincham line when it ran a G-Mex to Altrincham service during a service reformation. 2005 then spent over a year out of service following an accident with a refuse lorry on 26th September 2004 which saw the damaged half of the tram being sent away to Crewe Works for repairs. Despite the return to Manchester of the damaged section in April 2005 it wasn’t until 12th October 2005 that 2005 would carry passengers again. Then on 6th May 2009 the tram formed a rare coupled T68A set with 2003 between Altrincham and Bury but it didn’t last long as the pair failed at Woodlands Road and were returned to depot. 2005 was withdrawn from service on 9th May 2013 and was sent for scrapping in Rotherham on 15th October 2014.

Today’s photo shows 2005 leaving the terminus at Eccles on 23rd September 2000 with a service bound for Piccadilly. 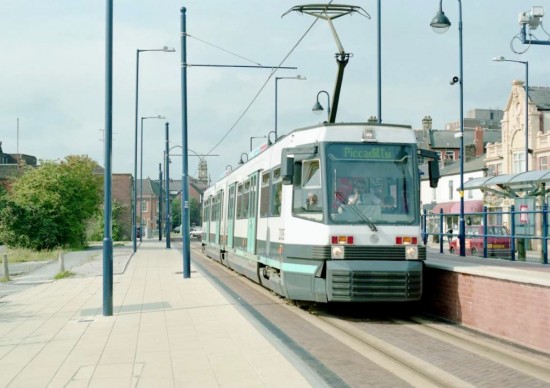