Posted on Wednesday 9 March 2016 by Gareth Prior

Today our archive picture series heads across the Irish Sea back to the Isle of Man with our image this time coming from the Manx Electric Railway in 1992.

It is a wet 26th August 1992 at Derby Castle when our photographer captured no. 1 awaiting departure north with a Toastrack from the Douglas Horse Tramway just visible on the right hand side. It is well known that 1 is one of the two trams in the Guinness Book of Records as being the oldest tram still operating on its original system having entered service back in 1893 when the Manx Electric Railway originally opened to passengers. In this photo we see the tram in the Maroon and Cream livery of the Douglas and Laxey Coast Electric Railway in a similar style to that which it carried when first built. 1 had received this style again during an overhaul in the late 1970s and would continue to carry the Maroon colours until 2004 when it was repainted into the more familiar red, white and teak livery. 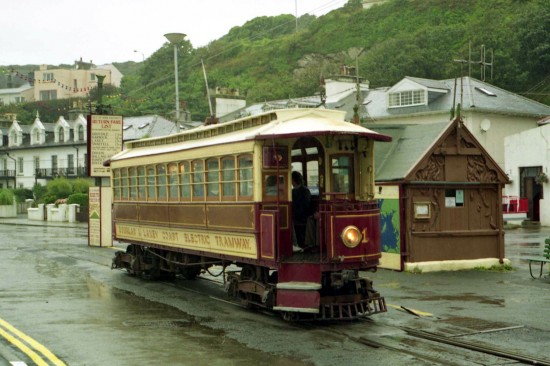