An epic journey concludes for Standard 147

The road journey from Blackpool to Beamish by Standard 147 finally reached its conclusion on the morning of Wednesday 2nd March, when the tram finally arrived at the North East museum. Once unloaded, Marton 31 was then placed on the same low loader for its own journey to Blackpool, which was completed significantly more quickly and the tram is now safely housed inside the Rigby Road car sheds.

However, the above paragraph does not really do justice to 147‘s recent adventures! As reported previously, the tram left Blackpool on the afternoon of Monday 29th February, somewhat later than anticipated as the lorry’s arrival was delayed. This was only the start of what would be a very protracted journey, with further issues encountered en route. The route to be taken by the haulage firm had been carefully planned out in advance taking the considerable height of the Standard car into full consideration, however it turned out that some of the data on bridge heights in County Durham which they had been given was inaccurate. Fortunately, the driver was extremely cautious and by positioning the lorry in the centre of the road and lowering the trailer as much as possible, the precious cargo was able to safely pass beneath the bridge. The closure of another bridge in Kendal also caused further delays and no doubt the grim weather provided further challenges, but on 2nd March, 147 finally reached its destination to the relief of many.

Sadly, 147 did not reach Beamish completely unscathed – a few of its quarter light glasses were damaged in transit after a close encounter with some tree branches – but otherwise the tram is alive and well despite its epic journey! Unusually, it was unloaded at the tram stop nearest to the Museum Entrance before being towed to the depot by Sunderland 16. There no time was wasted in removing the broken glass for repair and preparing the tram for service, with a general commissioning exam being undertaken. The trolleybase was reassembled and a spare trolley pole with carbon skate prepared for fitting, whilst the car’s lifeguards were put back in place. It is hoped to complete the commissioning process on Thursday so that the tram can run for testing and crew training purposes on Friday 4th March, to hopefully allow it to debut in public service at Beamish for the weekend’s ‘Power from the Past’ event.

It had been expected that this would weekend also witness the launch of Sheffield 264, but sadly it will not be ready as although the actual restoration is complete, the painting remains unfinished. Work will continue over the next week or so and the tram should be visible inside the depot at the event, with a launch date to be announced shortly.

Blackpool 31 was loaded up onto the same lorry that had brought 147 to Beamish, with Sunderland 16 again helping out by pushing the tram towards the ramp onto the low loader. Happily 31 had a much less eventful journey and by the end of the afternoon, it was safely in Blackpool. The tram was quickly unloaded and placed inside the Electrical Compound, which has become quite the meeting place for recently repatriated tramcars of late!

Once again, our thanks go to all involved in making this temporary swap of trams possible, and we look forward to sampling both 31 at Blackpool and 147 at Beamish in the near future! Full credit should also be given to Calkeld’s Heavy Haulage who carried out both moves with great professionalism and who ensured that these were carried out as smoothly as possible. 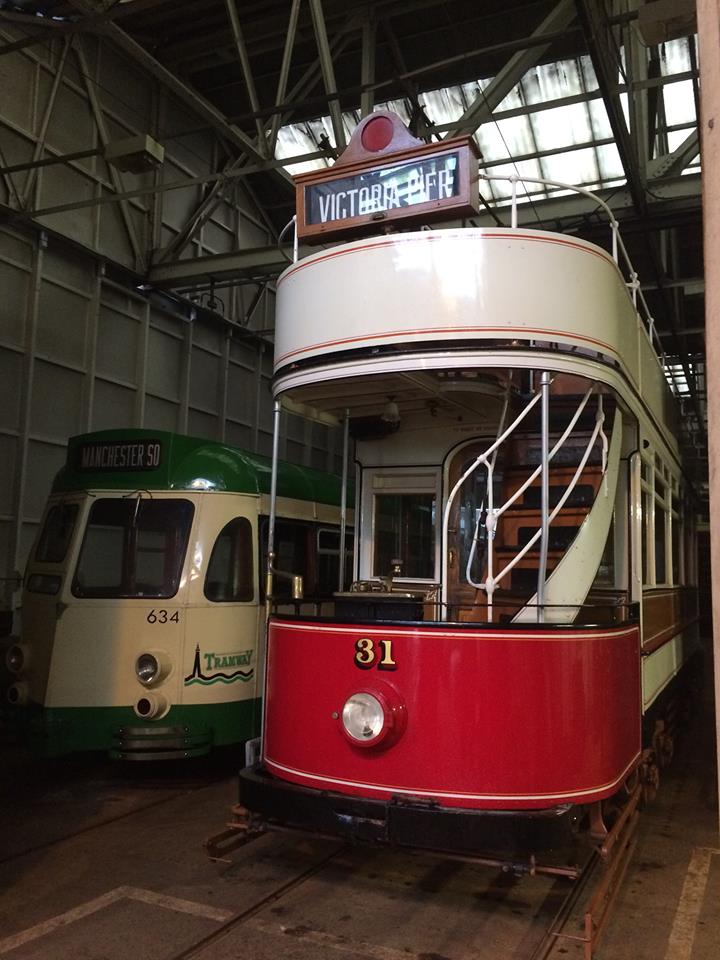 At Blackpool, Marton 31 shares the Electrical Compound with Brush car 634. These trams last met in 1999 as 634 had already left for preservation on the occasion of 31's last visit; who would have believed they would meet again!? (Photo courtesy of Blackpool Heritage Tram Tours)

1 Response to An epic journey concludes for Standard 147