Posted on Wednesday 20 January 2016 by Gareth Prior

The subject of the latest edition of Picture in Time is one of three Twin Motor Cars which were never permanently coupled to their trailers – 678.

Built as 278 in 1935 the tram was originally one of the Second Series English Electric Railcoaches and continued to operate in this form until the early 1960s at which point it entered the workshops for conversion into a Twin Motor Car. It was the penultimate English Electric Railcoach to go through the workshops (only 274 went through the programme later) and it entered service during the summer of 1961. Renumbered as 678 in the 1968 renumbering the tram was destined to never have a permanent mate with T8/688 withdrawn from service during September 1972 and then scrapped ten years later. So 678 remained solo for the remainder of its operating life which continued until the end of the 2006 season when it was withdrawn from service whilst carrying an all over advert for Radio Wave. The tram is now part of the Fleetwood Heritage Leisure Trust collection and is currently stored at Wyre Dock.

The photo shows 678 on a Fleetwood to Starr Gate journey running through Broadwater on 31st August 1993 whilst carrying the standard single deck fleet livery of this time. 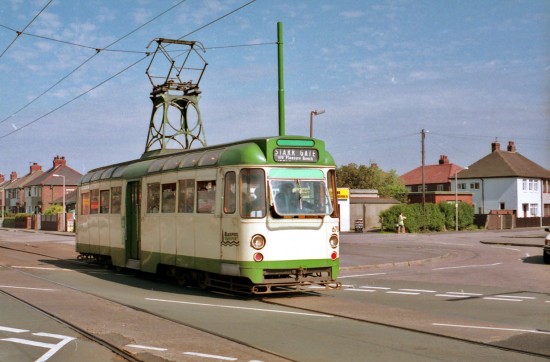