Posted on Wednesday 25 November 2015 by Gareth Prior

After a week’s break (sorry!) we are back with our archive series “Picture in Time” and head to Blackpool for a couple of photos of Blackpool Brush 625 in 1993.

Blackpool Brush Railcoach 625 entered service as 288 at the end of July 1937 and settled into regular operation with not a lot to write home about for the first 20 years of its life before it became the first of the class to lose its double destination indicators for a single screen in 1957. A pantograoh didn’t follow until 1991. Over the years the tram has almost exclusively been in fleet livery except for a two year spell at the start of the 1990s when it received an all over advert for Family Choice, which included a lot of white! The tram continued to be part of the operating fleet until the great mothballing at the end of 2004 with its last reported use being on 6th November of that year. It remained stored at Rigby Road until the end of 2011 when it was transported to Merseyside having been acquired by Merseytravel for the now aborted Wirral Waters tram scheme. 625 returned to the Fylde Coast in June of this year and is currently stored along with the Fleetwood Heritage Leisure Trust’s trams in Wyre Dock.

In the first photo we see 625 heading towards Thornton Gate with a Fleetwood service on 31st August 1993. 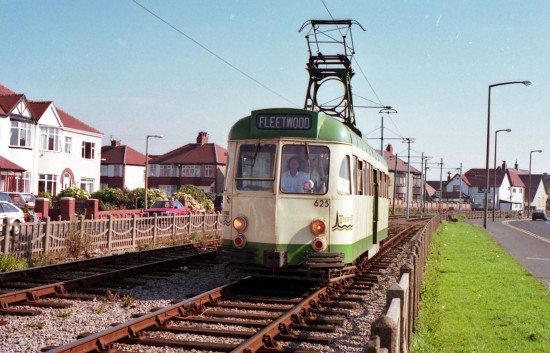 And then later on in the same day we catch up with 625 at Broadwater again on its way to Fleetwood. 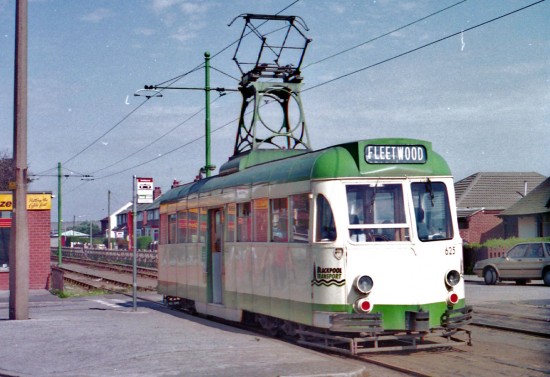