Posted on Sunday 8 November 2015 by Gareth Prior

The latest edition of Picture in Time heads back to Manchester as we take a look at Metrolink’s T68 1016 during the first year of its operation – 1992.

1016 was delivered to Manchester on 13th February 1992 and entered service on the very first day of operation – 6th April 1992. The tram is probably unique in the T68s in that that it has made two trips to Wolverton Works; the first of which was in 2006 when it went down for refurbishment works as with all of its fellow classmates. But another trip was necessary in 2008 for repairs to damage caused by a derailment at the end of June. 1016 was coupled to 1008 and derailed as it crossed Princess Street mounting the pavement and demolishing two of the overhead support poles. The damage was sufficient enough for repairs having to be outsourced and it spent a month at Wolverton Works in August and September 2008 for this purpose. The tram was officially withdrawn from service on 10th February 2014 but was resurrected for use on the Farewell T68 tour in May of the same year receiving special “FAREWELL T68” name stickers for the event. 1016 left Manchester on 21st August 2014 but was not destined for the scrapman as it headed to Long Marston where it has joined the UK Tram test fleet.

This photo shows 1016 on 27th April 1992 – the first day of public cross city operations – heading through Shudehill. At this time Shudehill did not have a tramstop with the area looking very different to that we know today. 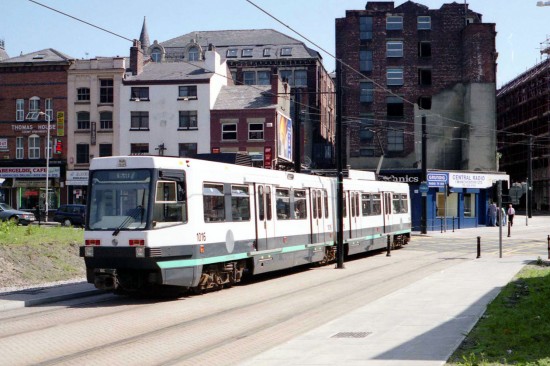