As briefly mentioned previously on British Trams Online, the final weekend of the 2015 Blackpool illuminations has been enhanced with an increased heritage tram output now planned. Instead of the basic two car promenade service originally expected to operate, the four car green timetable will now run on both Saturday 7th & Sunday 8th November. However, since being announced this has been further enhanced with six heritage trams now expected to run on both days.

For most of the weekend there should be five trams from the heritage fleet in action, although a sixth car is also due to join in with the fun during both afternoons. Note that Saturday will start with four cars, with a fifth and sixth added later on. Rather than heading back to depot at the end of their duties, the trams are set to return south to Pleasure Beach, presumably to enable their use on illumination tours if required.

The star attraction – availability and weather permitting – should be ‘Princess Alice’ 706 which should be making its final appearances in passenger service before it is temporarily withdrawn from use to await workshop attention to rectify its increasingly poor condition. This could therefore be the last opportunity for a few years to enjoy an open top deck ride along Blackpool promenade, so let us hope that the weather will be kind to allow a fitting farewell to one of the most popular Blackpool trams.

On this weekend, heritage trams will run between Pleasure Beach and Bispham or Little Bispham every twenty minutes from 1000 to 1700, with a few shorter workings also planned in-between. As a very welcome additional treat, there will be a few journeys to Cleveleys and best of all, no less than five tours will operate through to Fleetwood – these are timed to depart from Pleasure Beach at 1400, 1440, 1500, 1520 and 1600. Now that the clocks have gone back the last few trips will be in darkness and will effectively offer a bonus tour of the illuminations! Of course, ‘proper’ lights tours will also run on both evenings for the last time this year and it is understood that some of the more unusual members of the operational heritage fleet will be allocated to illumination tours, adding some extra novelty value to the occasion. Some additional surprises may also be added to the mix, in typical Blackpool style!

The 2015 season has undoubtedly been a hugely successful and historic one for Blackpool’s heritage trams and so it seems only right that the last weekend of the main season should be some sort of celebration, and as ever the staff and volunteers who have made the year such a triumph will be ensuring that the illuminations period ends in fine fashion. However, even after that the year will not be quite over for them as Santa Specials will be operating in December – and then it will be just three months until Easter! 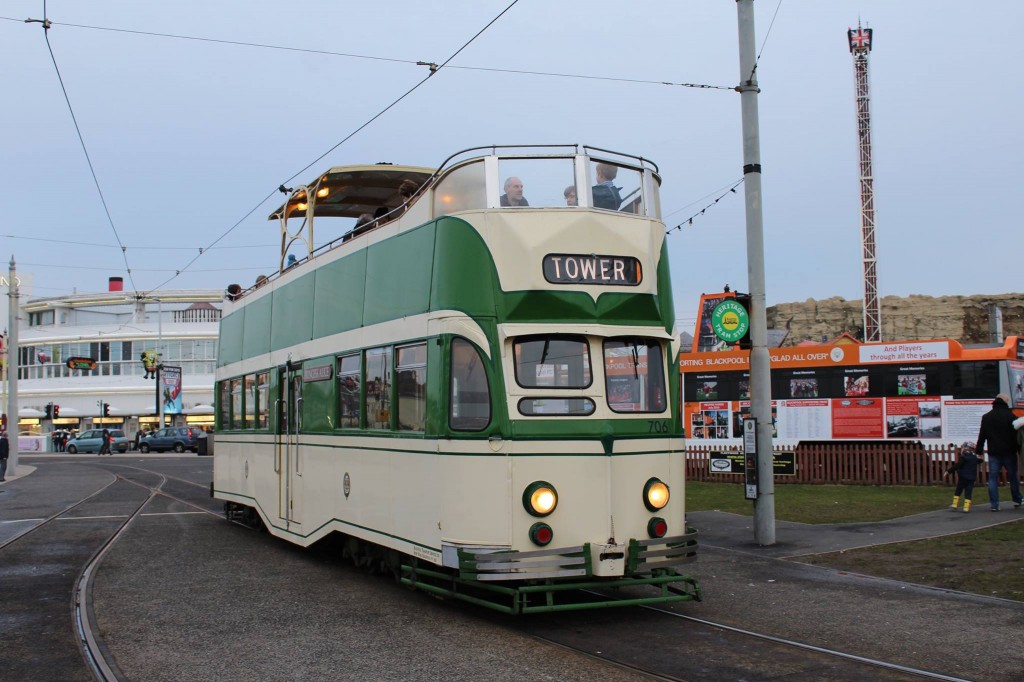 The likely star of the expanded heritage weekend on 7th & 8th November, 'Princess Alice' 706 is seen at Pleasure Beach during the October half-term week. The recent clock change has meant that the daytime heritage service now ends in darkness and here the daylight is clearly fading. (Photo by Bradley Jones)