Posted on Tuesday 27 October 2015 by Gareth Prior

Picture in Time heads south today for a visit to Eastbourne in 1968 where we see the tram we now know as Seaton no. 12 but in those days was probably actually Eastbourne or just plain old Modern Electric Tramway 12.

1968 was the penultimate year of operation for Modern Electric Tramways in Sussex before the tramway moved along the south coast and at this time no. 12 was only two years old having being built in 1966. If you think of 12 today you think of its double deck form as what a Feltham would have looked like as an open topper but when originally built it was a single decker with more than a passing resemblance to a Blackpool Pantograph car even down to the livery style. Originally constructed to the 2 foot gauge (and having heating when first running) it was converted to the 2’9” Seaton gauge in 1971 and continued to operate in Devon in this style until 1980 when it was rebuilt into an double deck open topper although it wasn’t to be until 1999 when it took on its Feltham design.

This image shows the tram at Eastbourne in 1968 during a pre-arranged visit by the photographer which included a tour of the system by Claude Lane himself. 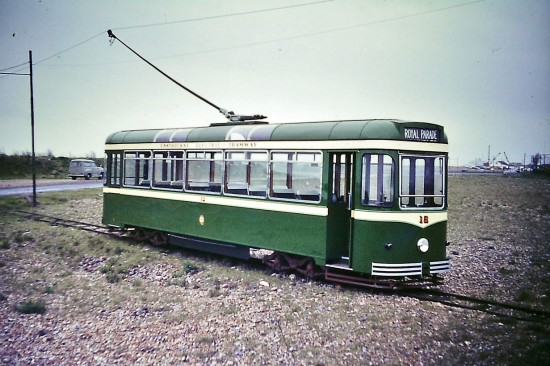 2 Responses to Picture in Time: Seaton 12