Posted on Thursday 13 August 2015 by Gareth Prior

Once again here is your one stop guide to just when and where you can go and enjoy a ride on a traditional tram in the British Isles over the next week or so. You may not realise it when you step out of your front door but we are now in the middle of the summer holidays and traditionally this means a quieter spell of special events for the majority of the tramways featured in this article. This week you can take a tram ride with a superhero on the Birkenhead Heritage Tramway (Saturday 15th August) and a little further into the month Sheffield 15 will be back out running at Crich (Tuesday 18th and Thursday 20th August). And, of course, traditional trams can still be seen running in 13 different locations with a friendly welcome for anyone who fancies going for a ride… 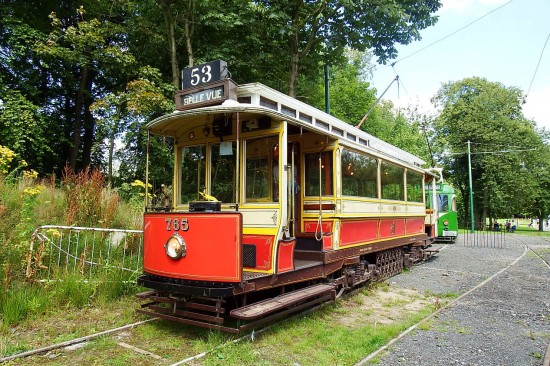 A view from the Blackpool Rocks Manchester event at the Heaton Park Tramway on Saturday 8th August with Manchester 765 and Blackpool Brush Railcoach 623 at Lakeside. (Photograph by Steve Kemp)