We feature Newcastle 102 again for today’s “Picture in Time” image. Last time we saw the tram as part of this series it was at Crich and was poised to head back to the northeast and that is where we take up the story.

As mentioned last time 102 received workshop attention at Crich in the late 1980s in preparation for it to head to the Gateshead Garden Festival and as a result of this it ran at the National Tramway Museum in both 1989 and 1990 before it headed back to the northeast. Proving a popular tram at Gateshead 102 returned to Crich but its sporadic use in Derbyshire continued with operation only seen in between 1992 and 1994 and in 1999 and 2000. At this time it was withdrawn from service again needing more workshop attention which it continues to await at the time of writing. Over the past few years the tram has made a few appearances in the open at enthusiasts events the most notable of this being at Electric 50 when it was displayed with on-loan fellow Newcastle tram 114. 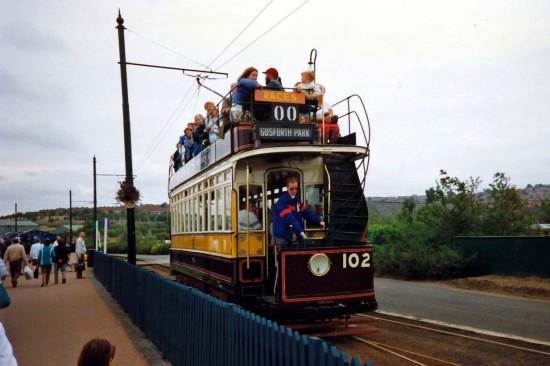