A new owner for Blackpool Centenary 643

Blackpool Centenary Car 643 has a new owner with the Fleetwood Heritage Leisure Trust arranging for the private sale of the tram to a specialist firm responsible for railway equipment sourcing. The tram will remain at the Wyre Dock storage facility for now but will eventually move on to pastures new.

As you may remember 643 last ran in Blackpool on 6th November 2011, the last day of the traditional tramway and was then acquired by the Broadwater Caravan Park. Being transported to the caravan park on 13th January 2012 the tram was converted into a static café including sinks and a revised seating layout and it was also treated to a repaint into a pleasing Cream and Green livery reminiscent of the Coronation Cars. But it was not to remain in Broadwater for long as on 28th February 2014 it was to make another short road trip with the caravan park having a change in priorities and no longer needing the café.

The tram was given to the Fleetwood Heritage Leisure Trust and made its way to the Wyre Dock storage facility where it has remained for the past 15 months or so but now another new life beckons for 643. The unnamed railway equipment sourcing company have purchased the tram with a view to its future use as a themed vehicle display unit.

The Trust have been looking to dispose of the tram for a while and have tried to get interest from both Blackpool tourism bodies and a national bar and restaurant group but this proved to be a dead end hence the decision to sell the car to this firm.

The funds from the sale will be utilised to pay property taxes on the storage site required by Wyre Council and also to assist costs in moving sister Centenary 641 – on which further progress is currently being made on the transformation into the Blackpool FC celebration tram – to the display track at Pleasure Beach. 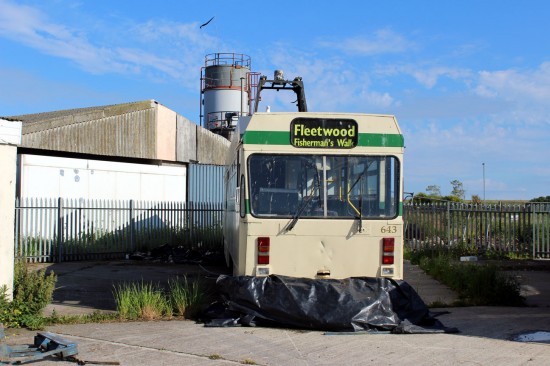