Posted on Thursday 11 June 2015 by Gareth Prior

It is time again to bring you a round-up of when and where you can enjoy a ride on a traditional tram with the British Isles over the next week. The highlight of this period looks set to be the relaunch of London County Council 106 into service at the Crich Tramway Village during the Classic London event (13th and 14th June) whilst on the Isle of Man the intensive TT service on the Manx Electric Railway is coming to a close with the last operation of this timetable due on Friday 12th June. Looking further ahead Sunday 21st June will see the next operation of the Gold timetable in Blackpool but more on that next week…

Sunday 21st June – Gold timetable (6+ trams in service) running including the only opportunity this year to ride on the heritage fleet to Starr Gate in passenger service. Full details to follow.

Current Status: Closed this weekend due to electrical works, but expected to re-open on Saturday 20th June. Normally open every Saturday & Sunday. Trams run between 1200 and 1600.

Until Friday 12th June – Timetable FH (21 departures from Derby Castle each day between 0840 and 2140, 3 of which only run as far as Laxey – same southbound journey platform)

Saturday 13th June to Friday 17th July – Timetable C (11 services in each direction including 9 full length journeys). On all Wednesdays during this period and Fridays until 26th June evening services run between Derby Castle and Laxey, from Friday 3rd July evening services also run through to Ramsey) 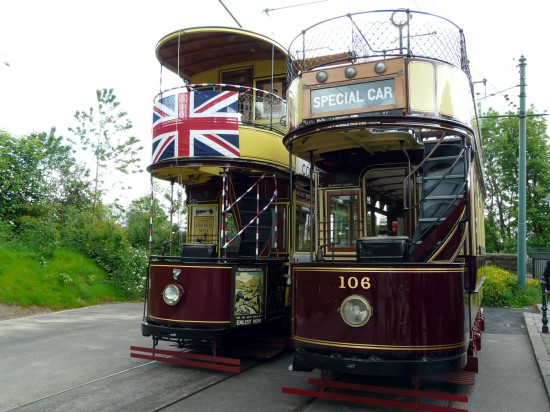 London County Council 106 will be relaunched into service on Saturday 13th June and has recently been undergoing final testing at Crich ahead of this. Here it is seen alongside Chesterfield 7 on 9th June. (Photograph courtesy of Crich Tramway Village)