You know the drill by now, Thursday evening = our regular look at just when and where you can enjoy a ride on a heritage tram in the British Isles. Highlights of the next seven days include the end of “Beside the Seaside” at Crich and the most intensive service of the year on the Manx Electric Railway from Monday 1st June. Plus don’t forget just because there aren’t special events at other tramways across the country doesn’t mean there isn’t a good reason to visit them!

Next special event: Beside the Seaside – Until Sunday 31st May

Until Sunday 31st May – Timetable D (14 departures from Derby Castle each day between 0840 and 1640, 5 of which only run as far as Laxey – same southbound journey pattern)

Monday 1st to Friday 12th June – Timetable FH (21 departures from Derby Castle each day between 0840 and 2140, 3 of which only run as far as Laxey – same southbound journey platform)

Saturday 13th to Friday 17th July – Timetable C (11 services in each direction including 9 full length journeys). On all Wednesdays during this period and Fridays until 26th June evening services run between Derby Castle and Laxey, from Friday 3rd July evening services also run through to Ramsey) 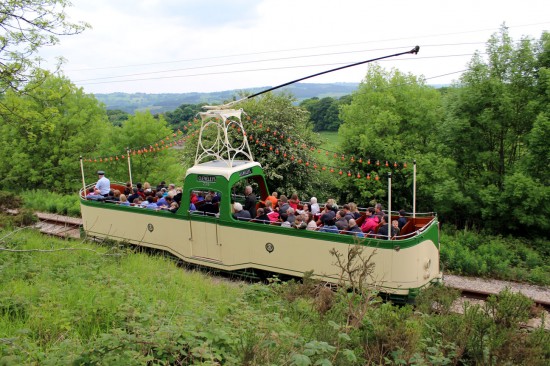 Beside the Seaside is continuing at the Crich Tramway Village until Sunday 31st May. This photo was taken at last year's event and shows Blackpool Boat 236 departing from Glory Mine. (Photograph taken by Gareth Prior)