For our latest edition of “Picture in Time” we are off to the London for a view of the Docklands Light Railway on the second day of running: 1st September 1987.

The Docklands Light Railway in 1987 was a very different system to that we see today with only two lines being in operation: from Tower Gateway to Island Gardens and from Stratford to Island Gardens. Initially there were only 11 trains needed to operate this service with the P86 trains being constructed by Linke Hofmann Busch and services were run by single units (very different when compared to today’s triple units across many more lines). Opening on 31st August 1987 the system has grown tremendously in size in less than 30 years and shows just what can be achieved with light rail if politicians can be persuaded it is a good idea. As for the original trains they were sold in 1991 to Essener Vekehrs-AG and are now used on the Stadbhan network in Essen, Germany following conversion.

This view shows the original 04 running on the elevated section of the Docklands Light Railway on 1st September 1987. 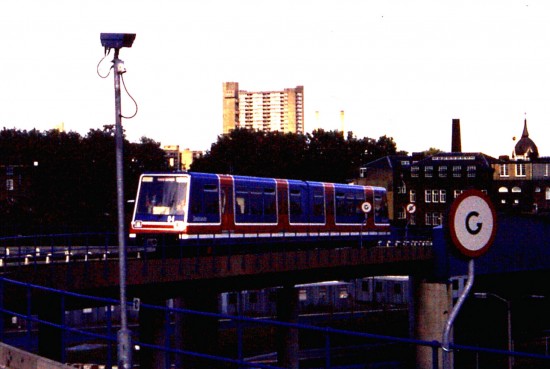