Today “Picture in Time” is in Blackpool once again with a view of Centenary Car 645 taken in 1993.

Centenary Car 645 was the first of the class to arrive in Blackpool during 1987 being delivered to Rigby Road Depot on 8th September 1987. It was to be nearly two months before the tram carried its first passengers entering service on 27th October 1987. At the time of this photo 645 had only ever carried green and cream fleet livery although was in the second simpler style at this stage. It was to be only a few more months before 645 would receive its first all over advert livery and since then has never been reintroduced to a green or cream paint pot. 645 failed in service on the last day of the traditional Blackpool Tramway on 6th November 2011 and left Rigby Road in January 2012 for the Windy Harbour Caravan Park where it remains today.

In this photo we see 645 pausing at Pharos Street stop at the start of its full length journey to Starr Gate on 12th June 1993. 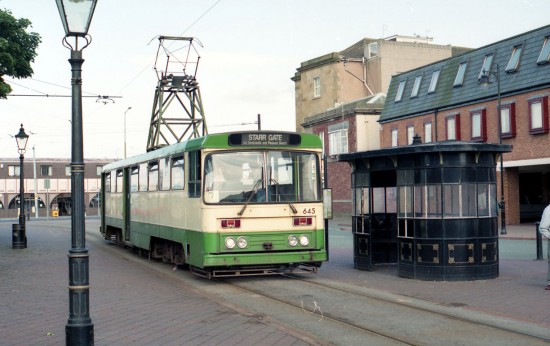