The second day of Blackpool’s heritage tram service for 2015, Sunday 29th March, saw two more trams making their public debuts for the year. For the second day running the weather was extremely poor for much of the day, with the sun only coming out late in the afternoon, but that did not prevent two different trams running – the chosen pair being Twin set 272+T2 and Centenary car 648.

These two trams were quite surprising but extremely welcome choices and both cars operated exclusively between Pleasure Beach and North Pier on the ‘blue’ timetable. Passenger loadings were lower than on the Saturday, but still quite good considering the rain and wind which battered the promenade – and of course the use of volunteer crews means that the trams were running at a profit, which is the most important thing!

The use of the beautiful cream Twin set was especially notable as these trams were traditionally employed most in the high season. Appearances in service at Easter were always rare, so to have one out a week before Easter Sunday may well have been a first. This shows us again that the Blackpool tramway still has the ability to surprise in the modern era and history is still being made even now. This was also a good chance to see the recently fitted black and white destination blinds on the trams, although so far 648 has only received this treatment at one end – presumably the blind fitted was a prototype to ensure that it would fit, as the Centenary cars have different sized destination screens to the rest of the fleet.

Hopefully the positivity regarding the heritage tours will continue to grow and 2015 will prove to be a golden year for this world famous tramway. 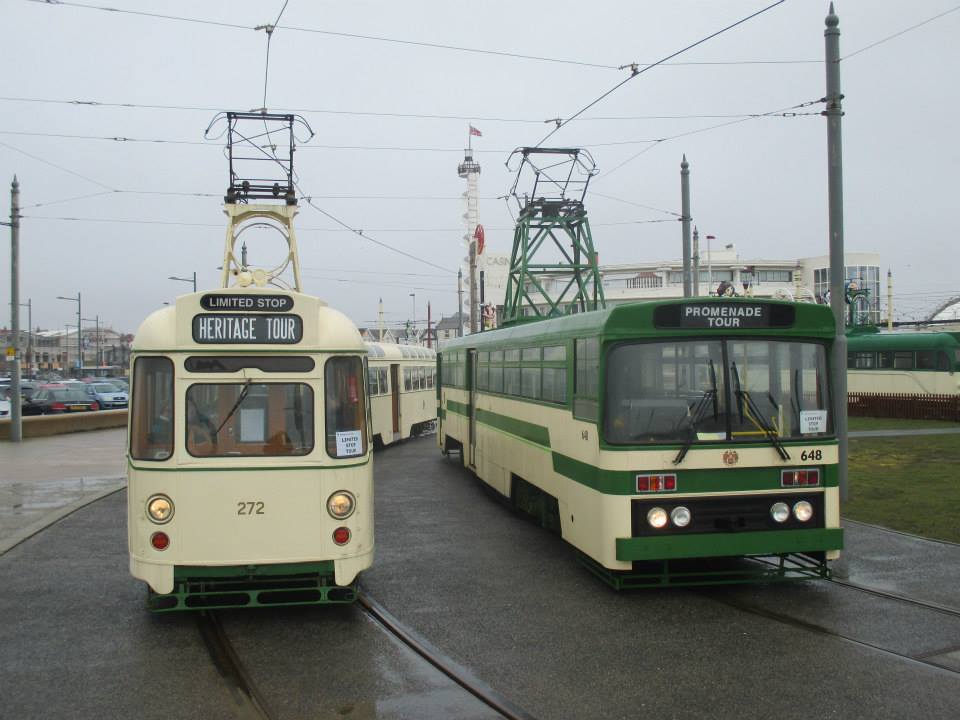 A superb scene at Pleasure Beach during meal break time, as Twin set 272+T2 meets Centenary car 648, The new heritage style destinations can be seen clearly on both trams. (Photo by Rob Bray)