The main Seaton terminus of the Seaton Tramway is set for a major facelift later this year if plans currently being prepared are approved it has been announced. Although exact details of what the improved terminus will look like have not yet been revealed it is planned that it will be state of the art and will provide an all weather facility.

The current Seaton terminus was opened in the early 1990s but in wet and cold weather it can be rather exposed and it is planned that the replacement will address this. It will also improve the interpretation of the Tramway’s history and operations and will provide all the usual facilities expected of a leading visitor attraction.

The area surrounding the terminus has been much improved in recent years with a new Tesco superstore opening (replacing the derelict old holiday camp) whilst work is currently underway on building a new Jurassic Coast Visitor Centre. The Tramway believes that this means they now need to develop a terminus in keeping with its neighbours.

Jenny Nunn, Chief Executive of Seaton Tramway, said: “We are working closely with East Devon District Council and the Devon Wildlife Trust to ensure all our plans are compatible and can jointly contribute to the economic success and wellbeing of Seaton and the surrounding area. I am extremely excited by the prospect of co-operating with our local authority, voluntary sector and private partners to really put the town on the map, for all the right reasons”

It is planned that work will start on the new terminus in September and that it will be ready for use by Easter 2016.

It has also been confirmed that the Tramway started the process of converting to charitable status at the end of 2014 and all being well this will be approved by the end of the year. This change of status is said to help ensure that Seaton Tramway continues to preserve, protect and enhance access to both its own transport heritage and to the natural environment around it. One major advantage of becoming a charity is the funding streams which become available to help with future growth and investment.

Bruce Warnes, Chairperson of the Tramway, said: “The time is definitely right for us to move the tramway into a new era, where charitable status will help consolidate our position as one of East Devon’s leading attractions and ensure that even more visitors can enjoy the magic of our trams and the Axe Valley for decades to come.”

All in all it looks like the Seaton Tramway is just about to enter another exciting era after 45 years of operation. 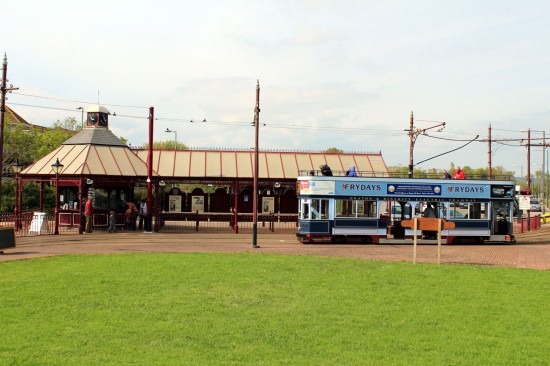 The current Seaton terminus is seen on 3rd May 2014 with 9 waiting at the loading stop. If the plans are approved by the local Council the terminus will look different come Easter 2016. (Photo by Gareth Prior)