Posted on Thursday 12 March 2015 by Gareth Prior

The Ipswich Transport Museum isn’t only home to the Cambridge horse car (see separate story for news on its restoration) as Brush built Ipswich Corporation Tramways 33 is also on display at the Museum.

The open top double deck tram was built in 1904 and acquired by the Museum in 1976. A replacement truck was obtained from Lisbon in 1994 (still retaining the Lisbon gauge) and placed under the tram enabling the tram to be displayed in the Museum. Further restoration work followed between 2002 and 2012 and the tram is now resplendent as one of the star exhibits of the Museum being displayed on a replica section of granite sett paved track. 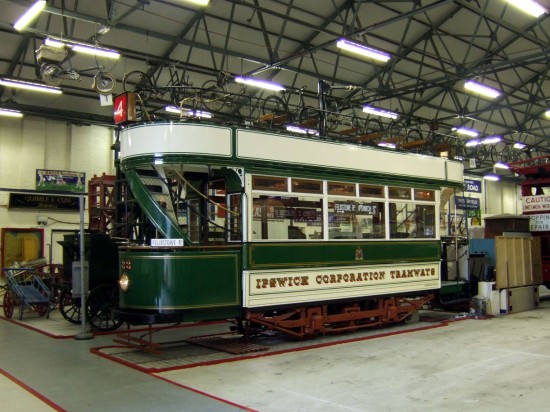 33 at the Ipswich Transport Museum. (Photo by Mike Abbott)