Posted on Tuesday 10 February 2015 by Gareth Prior

Nowadays if you think of the original Sheffield Tramway’s Roberts cars you think of the two preserved examples: 510 at Crich and 513 current at the East Anglia Transport Museum. But for our trip down memory lane today we feature a long-gone member of this popular class of trams: 523.

One of a batch of 35 trams built between 1950 and 1952, 523 entered service during 1951 and was to have a very short working life with the Sheffield tramway system closing in 1960 and sadly for this particular tram scrapping was to follow – 523 only had an operating life of nine years. 523 was part of the operating fleet in that final year and this photo shows the tram using the trolley reverser at Vulcan Road on 30th July 1960. Just a few short months later the story of trams in the South Yorkshire city was thought to be over following the closure of the last routes on 8th October 1960 – but we now know that just 34 years later trams would return to the steel city, but that’s another story! 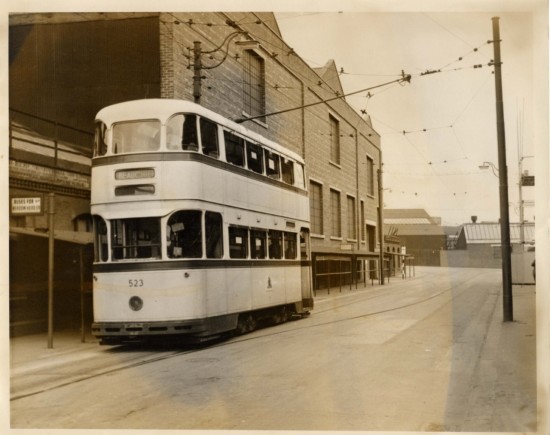