Posted on Saturday 7 February 2015 by Gareth Prior

Plans for the tram-train trial which will link Sheffield and Rotherham are progressing although hopes that it would be up and running by spring 2016 have now been dashed with no new start date announced. In order for tram-trains to run between Supertram and Network Rail metals a short section of track will need to be constructed to link the two and Network Rail and recently started a consultation into this 150 metre stretch of line.

Over two days at the start of February a public exhibition was held at The Source Skills Academy (next to Meadowhall South Supertram stop) showing the plans and asking for comments about the work. The tram-train project will eventually see services run between Cathedral in Sheffield City Centre and Rotherham Parkgate using a fleet of seven vehicles (four will be needed for the service with the other three being available to increase capacity on the rest of the Supertram network) currently being constructed by Vossloh at their Albuixech near Valencia in Spain. The first of these is due to be delivered this September and after commissioning is likely to run on the existing network ahead of the tram-train line opening.

As well as the new vehicles Network Rail will need to build 150 metres of new track at Tinsley (to be known as the Tinsley Chord). This will link the Network Rail and Supertram lines and will leave the current Supertram network just beyond the Meadowhall South stop. Network Rail have started this consultation as they need to apply for the powers to build the line, which is more than likely a major reason for the delay in the start of the service.

Full details of the plans and how to make your views known can be found at https://consultations.networkrail.co.uk/tinsley-chord/tinsley-chord. 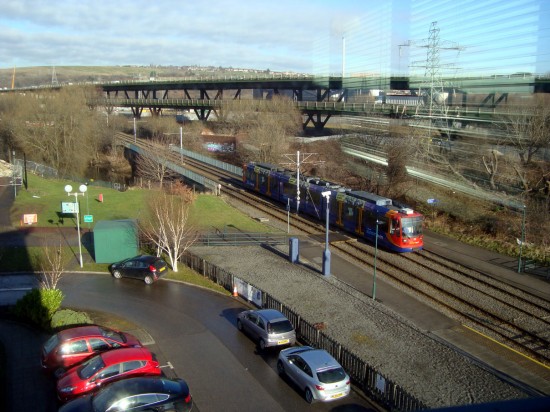 113 approaches Meadowhall South with a Purple route service. The new Tinsley Chord would leave the line just beyond the tram. (Photo by Stuart Cooke, 6th February 2015)