Posted on Saturday 3 January 2015 by Gareth Prior

Snow – it looks nice and is lovely when you don’t have to go anywhere but it can also cause major travel chaos and that is exactly what happened on Stagecoach Supertram after a 4” snow fall starting on Boxing Day in South Yorkshire meant services were severely affected. With staff members unable to get into work, frozen points and the problem of motorists abandoning their vehicles on the tracks Saturday 27th December proved to be a difficult day for Supertram but despite these setbacks a service was operated across all of the network by the end of the day, with the exception of the Purple route to Herdings Park.

Delays started during the evening of Boxing Day when the first snow of the winter fell in South Yorkshire. Initially a broken down tram on Park Grange Road and abandoned vehicles on the track saw the Blue route suspended between Sheffield Station and Halfway before limited operation was able to be resumed through to Birley Lane on the Blue route (a very unusual terminal destination). As Boxing Day ended the Blue was terminating at Gleadlees Townend with no service possible beyond there to Halfway.

As Saturday 27th December dawned the problems the snow had caused became apparent and although the Yellow route between Meadowhall and Middlewood was able to operate (although with delays) the Blue and Purple routes were not so lucky. Gleadlees Townend was the initial terminus for trams coming from Malin Bridge on the Blue route and at this stage no trams were running at all on the Purple route. The route beyond Gleadlees to Halfway was blocked by abandoned vehicles and frozen points whilst there were also problems with staff getting into work which limited operations on those routes which were running. By 1000 Blue route trams were extended to Birley Lane and an hour later the full Blue route was open to trams. The Purple route remained closed for the rest of the day.

With more snow flurries and the freezing of the initial snow fall there were fears that the delays may extended into a third day but as it was Sunday 28th December started with a full service in operation on the Yellow, Blue and Purple routes. 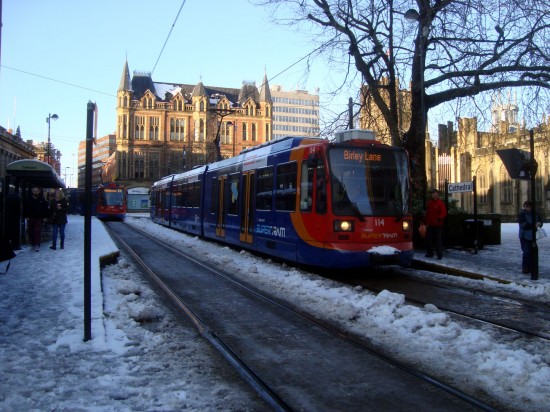 114 at Cathedral in the snow on 27th December with the unusual destination of Birley Lane. (Photo: Stuart Cooke)