Posted on Thursday 6 November 2014 by Gareth Prior

For the last time this year we round-up just where you can find heritage trams operating over the next seven days just as things start to die down after a very busy 2014 season. You just have a few more days left to enjoy a ride on a tram in their natural habitat with the Blackpool Tramway Illuminations tours continuing until Sunday 9th November. Elsewhere we are down to the winter operators with Beamish, Birkenhead, Heaton Park and Summerlee all continuing to run trams. (We will have a full round-up of winter trams next Thursday).

Operating Hours: Tours start shortly after the Illuminations are switched on nightly (details of times can be found at http://www.blackpooltransport.com/services/illuminations).

Operating hours: 1200-1700 using at least one tram. On Sunday 9th November Manchester 765 will be operating with its First World War recruitment decorations for one day only. 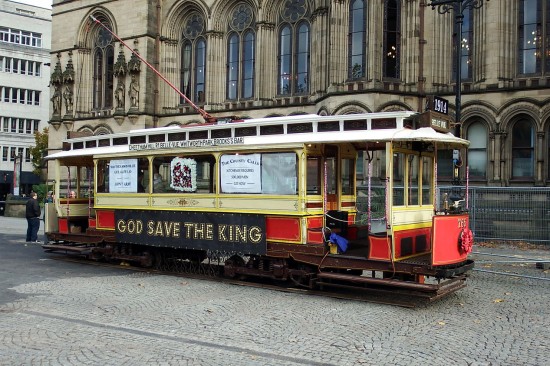 Manchester 765 is seen here in Albert Square, Manchester City Centre on 4th November. It will now run for one day only with these decorations on Sunday 9th November at the Heaton Park Tramway. (Photo: Steve Kemp)