Posted on Thursday 18 September 2014 by Gareth Prior

After the excitement of last weekend’s Electric 50 event at Crich we enter a bit of a lull with specific tram events but that doesn’t mean there is nothing happening! Beamish, Blackpool, Crich, the MER, Seaton, Snaefell Mountain Railway and Summerlee continue to offer a daily (or nightly in Blackpool’s case) service so there is plenty to keep you occupied if heritage trams are your thing. And it is only just over a fortnight until the main event of the year at Birkenhead so we aren’t all hibernating just yet!

There will be additional evening services between Derby Castle and Laxey on Friday 19th September.

There will be evening services (Summit diners only) on Friday 19th September. 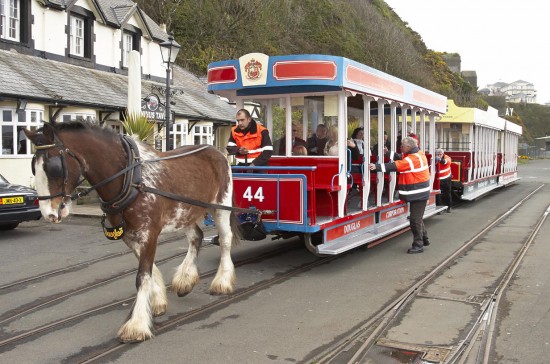 It may no longer feature above (as it has now finished operation for the season) but this week we feature the Douglas Horse Tramway with the appropriately named horse Douglas hauling the Royal Tram 44 away from Strathallan in May 2013. (Photo courtesy of Andrew Barton Photography)