Posted on Tuesday 15 May 2012 by Andrew Waddington

A recent visit to Crich Tramway Village revealed the rather strange sight of what appeared to be part of a modern tram sitting at the edge of the quarry, close to the car park. What could it be? Had the vintage trams decided to seek some sort of revenge on one of their more modern counterparts and subjected it to the sort of fate that befall many of their sisters? Has another TV soap opera staged a dramatic tram stunt and left the wreckage at Crich? Or could it be an attempt at creating some rather crude living accomodation for working members?

In fact, the item in question is the Cross River Tram: a mock-up of a modern LRV designed to show the kind of vehicle which, it was once hoped, could operate in the streets of London. As the project now seems to have fallen by the wayside, the mock-up was declared surplus and was acquired by the Tramway Museum Society as a potential exhibit to show ‘what might have been’. The eventual plan is that a cut-down version of the tram will be placed on display within the Derby assembly room at Town End, which is to be revamped with a new exhibition area telling the story of British tramway developments since 1962.

On arrival, the Cross River Tram was placed outside the assembly rooms but as the peak season approached, many people felt that it would be in the way, and also that it could be seen as an eyesore and not really in keeping with the period atmosphere of the village. The mock-up has now been relocated to the edge of the car park where it is hidden away from view to a certain extent, although anyone who is curious to see it can get a clear view of it from near the entrance building. The tram seems to have had various items dumped inside it and looks rather untidy, but at least now it is not so prominent. Whilst its true value may not be apprecitaed right now, this is an interesting acquisition for the TMS and hopefully it will not be exposed to the elements in its current state for too long, before being put on permanent display as a contrast to the complete trams on view at Crich. 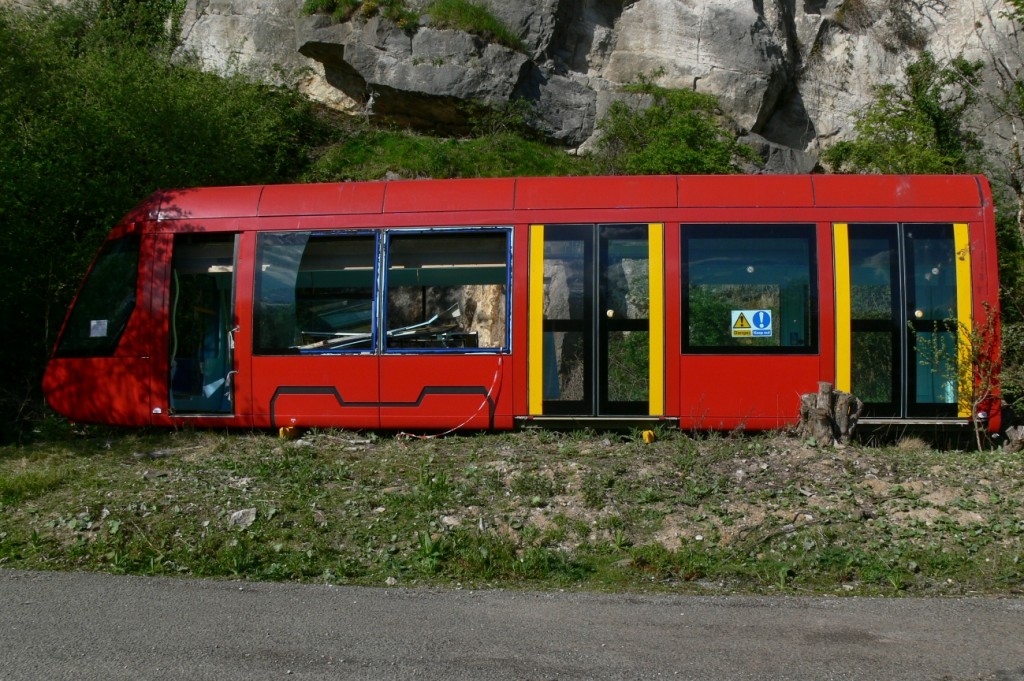 The Cross River Tram, seen apparently abandoned in its current location at Crich whilst awaiting development of a new exhibition which will allow it to go on display. (Photo by Andrew Waddington)