Posted on Saturday 2 August 2014 by Gareth Prior

Want to know when and where you ride on heritage trams over the next few weeks? Well if you do you have come to the right place as this is your one stop guide to heritage trams in the UK and Isle of Man! The Manx Heritage Transport Festival is currently coming to a conclusion on the Isle of Man with events continuing until Sunday 3rd August and attention is then turned towards Crich where over the weekend of 9th and 10th August it will be another 1940s Weekend.

Until Sunday 31st August – Timetable D (14 departures per day starting at 0940 from Douglas – not all run all the way to Ramsey) Enhanced services will run on Sunday 3rd August in connection with the Heritage Transport Festival. 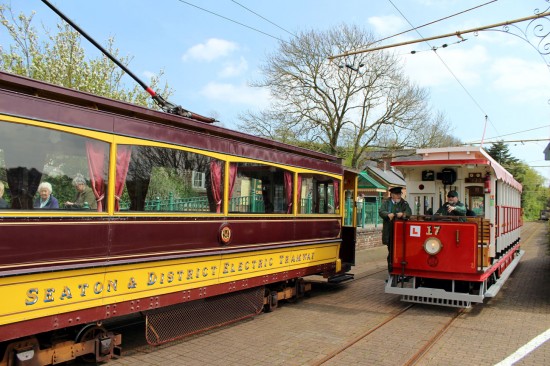 A scene at the Seaton Tramway on 3rd May 2014 showing ex Bournemouth car 16 and 17 at Colyton. (Photo: Gareth Prior)