On Tuesday 24th June, the last of the Lancastrian Transport Trust’s collection of historic Blackpool trams to be reclaimed by Blackpool Transport arrived safely back at Rigby Road – and arguably, the best one of the lot has been saved until last! The illuminated Rocket 732 has been marooned on the large roundabout at Gynn Square for almost two years, but is now back on home metals, and has regained undercover accommodation at last.

A low loader supplied by Scotts’ Heavy Haulage spent most of the day stabled on Blundell Street, fuelling speculation that, following the return of Balloon 704 on the previous day, the Rocket would be next to return home. Sure enough, the wagon set off for the short journey to Gynn Square in the early evening; the late start was due to the need to close off some of the adjacent roads to give the hauliers full access to the roundabout so that the precious cargo could be loaded as safely as possible. Despite the Rocket’s rather awkward position, the loading process was undertaken remarkably quickly – a stark contrast to the protracted unloading process when it had been delivered to that location nearly two years previous. Once loaded up, the convoy made a journey through the back streets of Blackpool before finally touching down at Rigby Road as darkness began to fall; a highly appropriate time for the return of a tramcar which ran almost exclusively after dark. The unloading process also passed without incident and by about 10pm, 732 was safely tucked up inside the tram depot, almost as though it had never left.

The Rocket has probably been removed from the roundabout in the nick of time, as its condition was beginning to deteriorate at a fairly alarming rate in recent weeks. Several body side panels and the rear tail fins had become detached, with parts of the framework beneath becoming exposed to the elements. This will have done nothing to help its structural condition which was already very delicate when it was retired from illumination tour duties after the 1999 season. The sad reality is that a huge amount of work will be needed to restore this unique tramcar to running order, and its unusual sloping saloon will present additional challenges in today’s world of strict health and safety regulations. However, at some point in the future, the Rocket will hopefully return to orbit along Blackpool promenade and this will be thanks to the efforts made to return this tram home as a much valued member of the town’s heritage tram collection. Hopefully the many people who have mourned its absence from service since 1999 will be happy that such positive action has now been taken to secure a bright future for this Blackpool icon, and maybe the funding can be found to allow a restoration to take place before too long.

The Rocket’s return also marks the end of one of the darkest periods for the history of tram preservation in the UK, which saw many of the preserved Blackpool cars forced into outside storage due to the LTT’s inability to secure more suitable housing for them. However, this is now nothing but a memory, and the Trust’s involvement with the tram preservation movement is now at an end, leaving Blackpool Transport as the custodians of a world-class collection of its historic rolling stock. However, just one more ex-LTT tram remains in outside storage, as Towing car 671 still awaits delivery to a new home after being purchased by a preservation group in the North East as it was not required by BTS. 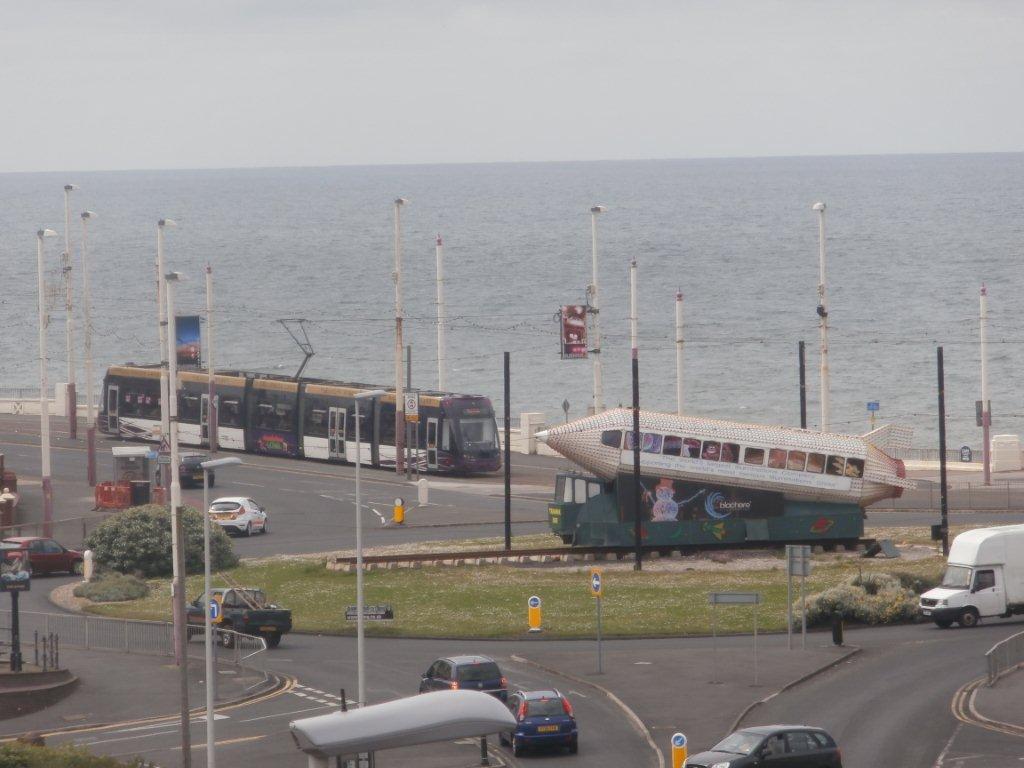 A recent scene of the Rocket, viewed from a novel angle, whilst in residence on the Gynn roundabout as a service tram passes by. (Photo by Colin Macleod) 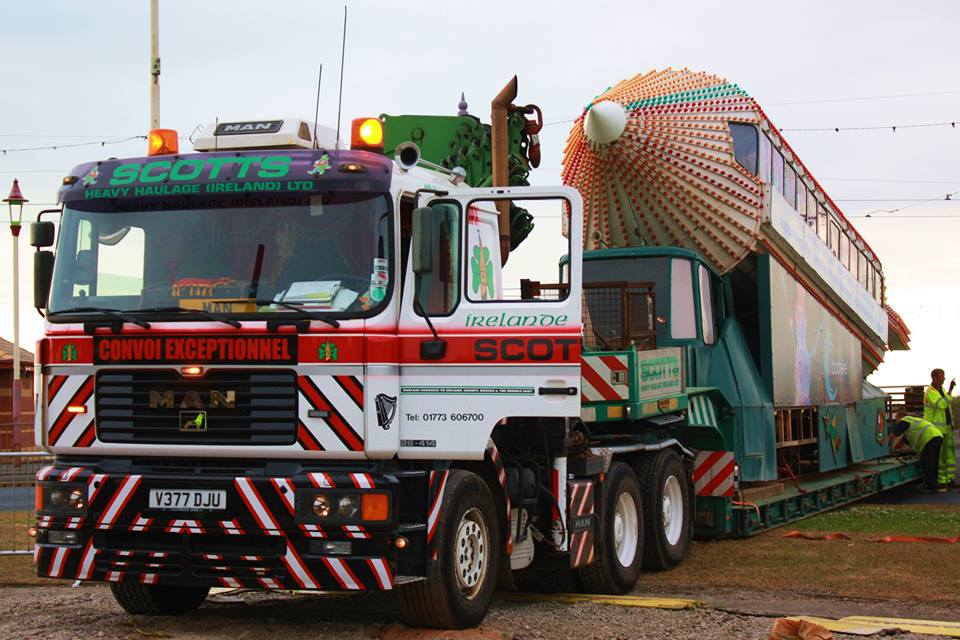 A few weeks later, and the Rocket has been loaded up and is ready to leave its less than ideal outside home on the evening of June 24th. 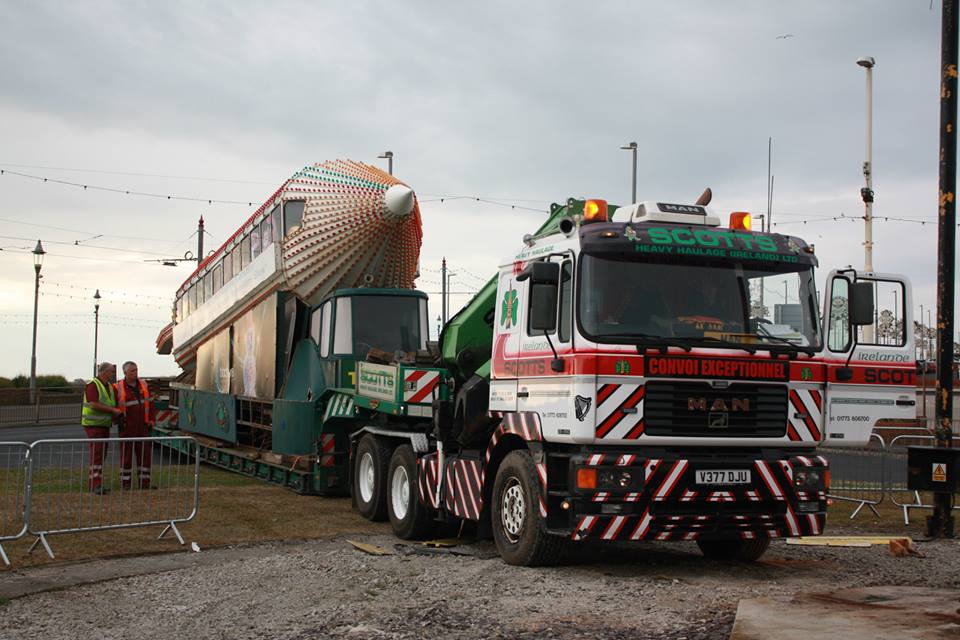 Another view of the Rocket in the latter stages of being removed from the Gynn roundabout. 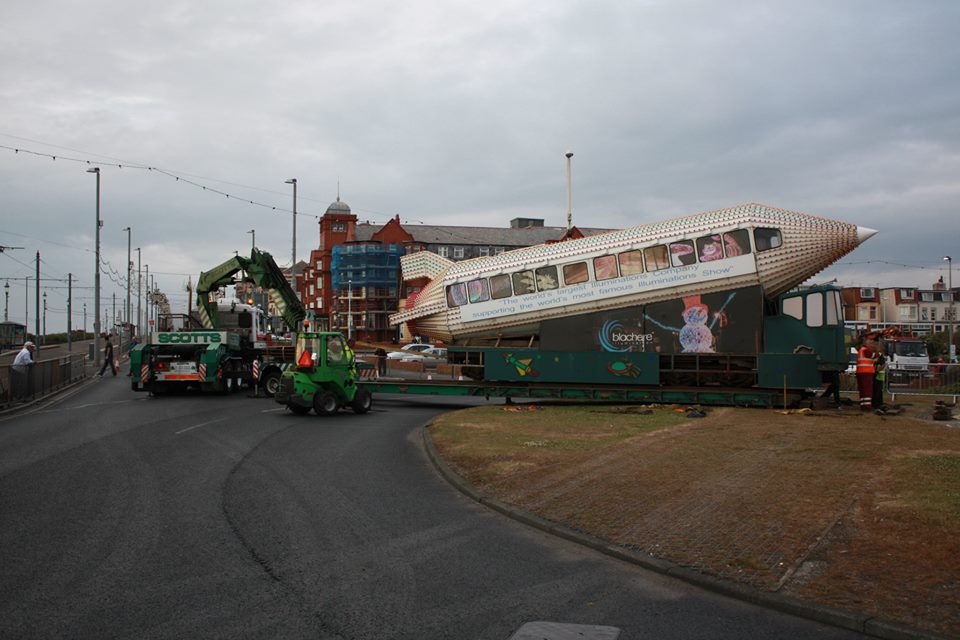 The transporter unit's powers are put to good use in dragging the Rocket from its resting place. 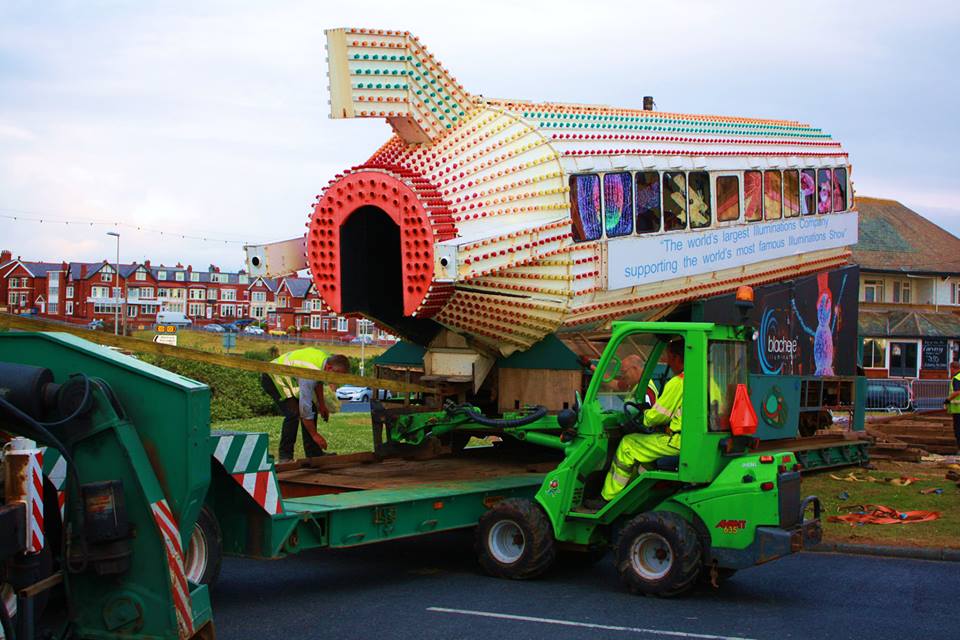 Our final images shows 732 from the rear end, with some of the recent body damage all too apparent. (Photos x 4 by Chris Callan)