The Rack is back!

On Saturday 14th June, Blackpool & Fleetwood ‘Rack’ 2 made a very welcome return to service at the National Tramway Museum, Crich. This popular 1898-built tram was sidelined after the 2012 season, but has now been reinstated to traffic to mark the 50th anniversary of electric trams running at the museum. As car 2 operated the very first passenger journey by an electric tram at Crich in July 1964, its return to use is particularly appropriate.

‘Rack’ 2 had actually begun its day posed on the depot fan, but was later pressed into action after Oporto 273 was taken out of service with a defect. Incidentally, this particular car has been rather troublesome since its recent overhaul, and it is hoped that this amounts to nothing more than a few teething problems which can soon be ironed out. However, with the Fleetwood crossbench car replacing it in service for the remainder of the day it is unlikely that visitors were left too disappointed by its sudden disappearance. Although it is a pity that car 2 has missed the recent ‘Beside the Seaside’ event, hopefully there will be plenty of opportunities to enjoy a ride on this tram during the summer season.

14th June also saw a considerable amount of activity in the workshop, where London County Council 106 has now been re-mounted on its refurbished truck. The car was then moved over to the wash bay with Blackpool ‘Boat’ 236 being used to shunt it across the depot yard. Another, more significant move also occured later in the day when London Transport 1 was moved into the workshop, presumably in readiness for the process of stripping the car for its major reconstruction to begin. Metropolitan 331 is also now in the works, which should hopefully be a positive step towards this tram being made operational again after a mishap led to its withdrawal just under a year ago. All in all then, a very good day at Crich with lots of positive progress being made – the best possible reaction to recent negativity surrounding TMS decisions. 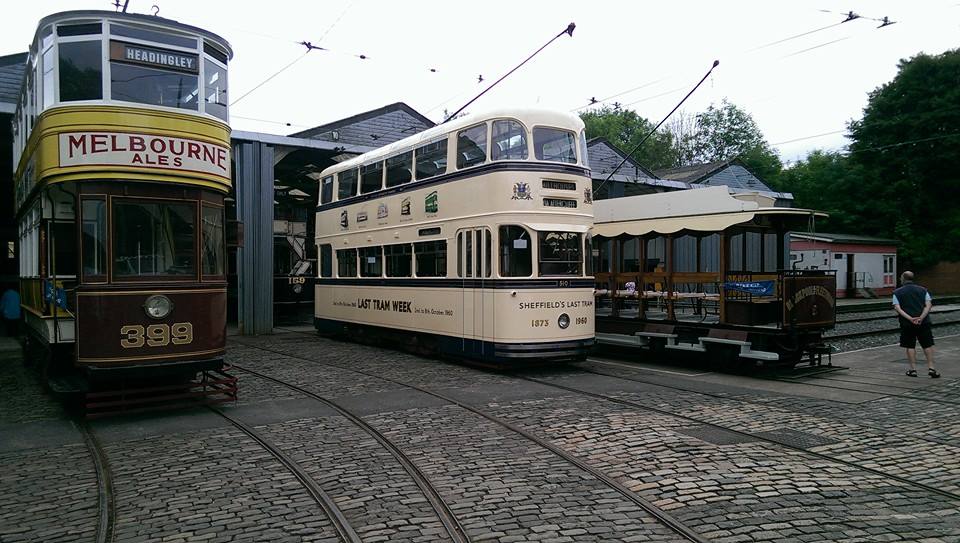 Depot yard line-ups at Crich have become more commonplace this year to make visiting on non-event days more attractive to the paying public. Here, Leeds 399 and Sheffield 510 are seen along with Fleetwood 2, shortly before the latter entered service for the first time in almost two years. (Photo by Martin Bryan)

2 Responses to The Rack is back!