London trams in the works at Crich

At Crich Tramway Village, the ongoing major overhaul of London County Council 106 is now at a well advanced stage. The tram – which last operated on a restricted basis in summer 2010 – has been partially rebuilt with replacement corner pillars and new body panels being fitted, whilst the truck of the car has also been extensively refurbished due to a very high standard.

106 is now being treated to a full repaint, with its original maroon and cream livery being re-applied. Work on reassembling the truck is now complete following the delivery of its brand new wheels and gears, and the refurbished wheelsets, and this awaits being refitted beneath the body of the tram.

It has not yet been announced when LCC 106 is likely to be completed; although it is hoped that the tram will be ready in time to participate in the much-hyped ‘Electric 50’ event in September, this is by no means a certainty just yet. As soon as 106 vacates the workshop, its place will be taken by London Transport 1 so that a start can be made on stripping this car ahead of a major restoration funded by the London County Council Tramways Trust, which will ultimately see the tram returned to its original blue livery and operate at Crich for the first time ever. A lot of work will need to be carried out on this tram however, which is in a very poor condition, and to further complicate matters it is anticipated that some of the materials which are not able to be retained in the restore vehicle will be retained and conserved due to the perceived historical significance of this unique tram. Therefore, whilst the tram is taken apart and then reconstructed, it will occupy a large amount of space, indeed the museum will need to find room for virtually an entire tramcar interior!

Another former London tramcar which has occupied the Crich workshop is the derelict horse car, North Metropolitan 184, which moved to the musuem site to be deconstructed at the end of last year.  The tram is now a kit of parts, which will shortly be returned to the Clay Cross store within specially made packing cases, after being treated to preserve them. Other parts which were too far gone have been disposed of, but not before the London Transport Museum were kept informed of any discoveries. Their Curator has also helped the TMS to ascertain some details about the car’s past, but have now indicated that their interest in it has ceased. 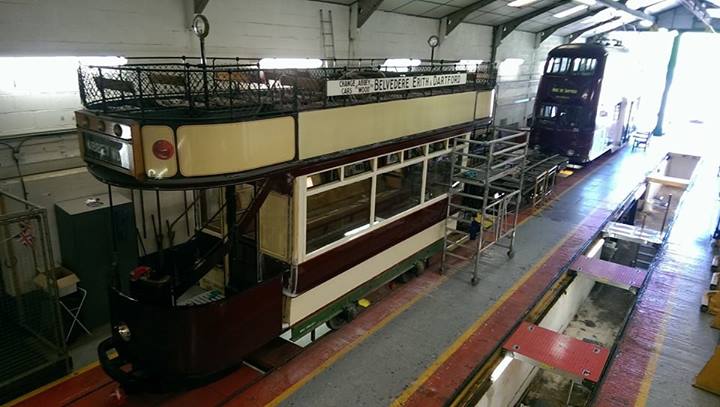 A recent view of LCC 106, now largely complete again and part way through being repainted. Visiting Blackpool Balloon car 711 can be seen in the background. (Photo by Martin Bryan)

11 Responses to London trams in the works at Crich