It has been a while since we supplied an update on the overhaul work on both Hull 96 and Manchester 765 at the Heaton Park Tramway, so to rectify this, we now offer the latest details on the ongoing work being carried out by volunteers to return these two stalwarts to a serviceable condition.

Looking at Hull 96 – or Leeds 6 as it has been known for several years having been painted in its latter day grey Leeds works car livery – first, and work has now restarted on this tram to a more respectable appearance. It may be remembered that some remedial work was undertaken on this tram when it returned from an extended loan period at Beamish over a year ago, but this had since been shelved due to the car having to stand outside whilst the construction of the new Lakeside Depot was completed, and to allow other more urgent progrects to be progressed. However, the car is now stored undercover again, and is receiving some further attention. On Sunday 1st June, a good deal of progress was made in stripping the body panels back to bare wood, so that various defects can be repaired as necessary. This has also revealed some interesting clues about its past, and the discovery of old paintwork has confirmed that the Hull livery it carried between 1988 and 2008 was not quite accurate. It was previously believed that the paintwork around the windows was all white, but it is now known that the corner pillars should in fact be maroon with gold lining, and this will be corrected when the car is repainted again. Other work on 96 will include repainting of its interior, and repairs to the folding platform steps. Once the tram is undercoated and varnished, it will be made available for service as an emergency reserve car; hopefully its repaint will be completed properly later in the year.

Meanwhile, work on the ever-popular Manchester 765 is nearing completion. The tram is now back on its wheels, having recently been lifted for a second time due to the discovery of a damaged axle box which has required replacement. Its recent overhaul has also included attention to the underframe and running gear, and repairs to the platform bearers. Since being reunited with its bogies, 765 was towed along the approach track to Middleton Road Depot to check that the new conduited wiring from the bogies did not foul the motor casing when they pivoted; once complete the wiring was then connected into junction boxes under the saloon seats before connecting the resistance banks and controllers. Lifeguards and steps have also been reassembled and fitted back onto 765 in preparation for its imminent test run.

765 is due to re-enter service on Sunday 6th July when a special event is planned to celebrate the car’s milestone 100th anniversary year. As well as the birthday tram being in service alongside Blackpool cars 619 and 623, one of the main highlights of this event should be a line-up of Greater Manchester area trams at Lakeside, which should provide the first chance to photograph 765 and Manchester 173 together since the latter’s arrival at the park late last year. A full preview of this event will be posted soon, here on British Trams Online.

Our thanks go to Martin Bryan for helping with the information in this article. 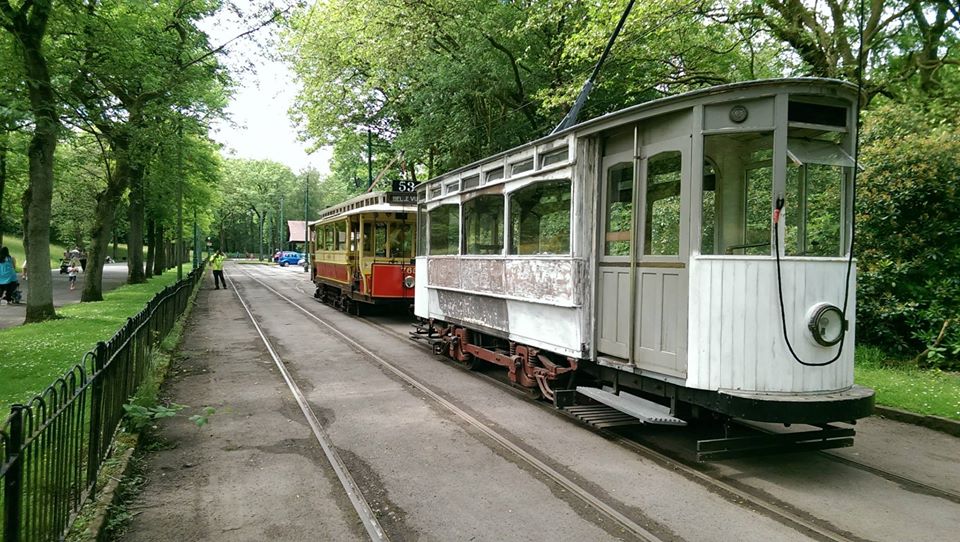 Hull 96 tows Manchester 765 onto the main line near the Middleton Road end of the Heaton Park Tramway on June 1st. (Photo by Martin Bryan)