On the evening of Thursday 5th June, Blackpool Pantograph car 167 was employed on a private hire working which saw it operate over the entire length of the Blackpool tramway with passengers on board – the first time this had occurred since 1998. Unusually, the tour started from Starr Gate with passengers allowed to board the tram at the southern terminus before it headed for Fleetwood in glorious early evening sunshine.

This was the first private hire to be performed by 167 during its current visit to Blackpool, and now explains why the tram was left behind at Starr Gate when the other operational heritage trams were all moved back to Rigby Road last week. It is believed that the car was hired by a local enthusiast who wanted to celebrate his birthday in a novel manner, and the presence of 167 was clearly too much to resist! With one of Blackpool Transport’s best tram drivers at the controls, 167 was put through its paces and the chance to ride on this beautiful tram later in the day than would normally be possible was greatly enjoyed by the invited guests on board, as was the rare chance of a ride from Starr Gate to Fleetwood Ferry on a vintage tram.

There will, however, be a chance for members of the public to ride a heritage tram along New South Promenade soon; the annual Totally Transport event being held on 22nd June will see a heritage service operate along the promenade to Starr Gate, and 167 is expected to be one of the three trams used on that day. Excluding empty runs between depots, private hires and other ‘out of service’ runs, this will be the first time that members of the heritage fleet have been used south of Pleasure Beach in the light rail era and this should ensure an excellent turnout for this event. 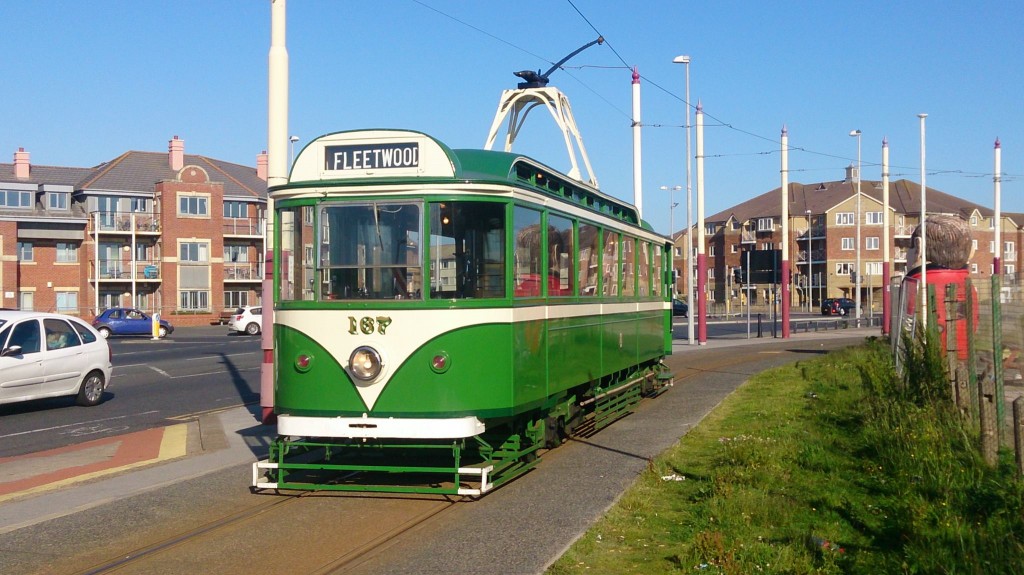 A stunning shot of Blackpool 167 in perfect sunlight, at the start of its evening outing on 5th June. The tram is pictured just south of the Starr Gate tram stop, a space normally only occupied by the Flexity2 class which did not exist when 167 last ran here with passengers. (Photo by Lee Andrews)