This is your one stop guide to when and where you can ride on heritage trams in the UK and Isle of Man. The highlights of the next week include a special event at the East Anglia Transport Museum (Suffolk Made & Operated on Saturday 10th and Sunday 11th May), the start of operations for the year on the Douglas Horse Tramway (Monday 12th May) before the next special event takes place at the Crich Tramway Village: The Best of Sheffield (Saturday 17th-Friday 23rd May).

Saturday 24th-Monday 26th May with a 3 tram service on each day. Further details to follow but the weekend should see the launch into service of Blackpool 167.

Next special event: The Best of Sheffield – 17th-23rd May. A full preview of this event can be found at http://www.britishtramsonline.co.uk/news/?p=7374.

Mondays-Fridays until Friday 23rd May – Yellow timetable. First tram Seaton at 1000 and then every 30 minutes until 1600 with returns from Colyton starting at 1030 until the last departure of the day at 1630.

The following services will be running during April/May: 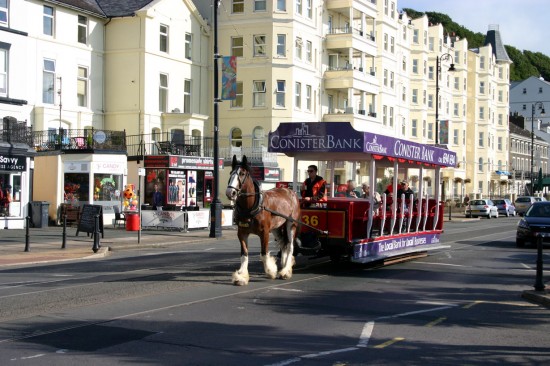 The last of three tramways on the Isle of Man starts operation on Monday 12th May with the Douglas Horse Tramway commencing daily running until September. This photo shows horse Keith hauling 36 towards the Sea Terminal on 14th August 2013. (Photo: Gareth Prior)