Centenary car 643 on the move again

Blackpool Centenary car 643 became the latest tram to make a journey by road on Friday 28th February, when the car departed its home at the Broadwater Caravan Park. This follows a short period of use as a static cafe for this tram, although its latest whereabouts are not yet known.

When the Centenary class were withdrawn from service at the end of the 2011 season, it was feared that most of them would be scrapped, but with the exception of cars 642 and 648 – which have been retained for further operation in Blackpool’s heritage tram fleet – all of them were sold. Since then car 646 has met its maker after suffering from a vandal attack, but until recently the rest had remained unmoved from the locations they transferred to after being sold. That changed on 28th February, when the familiar sight of a low loader provided by Scotts Heavy Haulage appeared at Broadwater Caravan Park, to remove car 643 just over two years after it was deposited there.

The departure of 643 has come as a complete surprise, as it had been refurbished and opened as a cafe less than a year ago and seemed to be quite popular in its new role. The tram had also been repainted in a very smart cream and green livery in 2013, based on the original fleet livery worn by the Blackpool Coronation cars. Having benefitted from this recent investment, it has come as a shock that the tram has left already, and it is sincerely hoped that the car will not follow sister 646 with a one way journey to a scrapyard.

If anyone has any information regarding 643‘s destination or what plans exist for its future, please contact us as we have absolutely no idea what is happening with this tram! 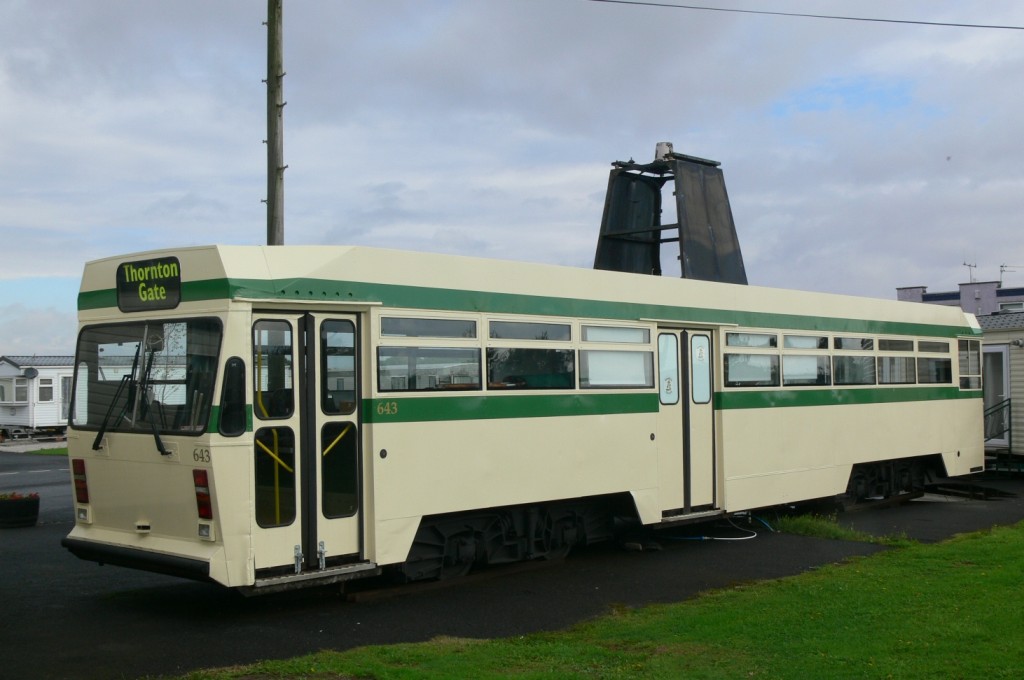 Centenary car 643 in the car park at Broadwater Caravan Park last September, showing off its recently applied paintwork. Never would we have imagined that so soon afterwards, this sight would be consigned to the history books. (Photo by Andrew Waddington)

6 Responses to Centenary car 643 on the move again