Posted on Tuesday 24 September 2013 by Gareth Prior

History was made late on Saturday 21st September when the two sections of Manchester Metrolink T68 1011 was removed from Exchange Square, where it had been used as an obstacle for a motorbike trial, for transport to Booths in Rotherham – a scrap merchants. As you may remember 1011 had been stripped of all useful components at Trafford depot in the past few weeks and was also reliveried into the new Metrolink colours before being transported into the city centre for its important role in the Red Bull Trials.

Once 1011 had been used for this purpose and removed from Metrolink premises it was expected that its future would not be particularly rosy but the speed in which it was removed from Exchange Square to go for scrap was probably faster than anybody would have expected. In being taken away from Manchester it becomes the first second generation tram to be sent for scrap (having also been the first to be officially withdrawn), a mere 21 years after it entered service. 1011 had run for the last time on 18th April 2012 and has since undergone component recovery firstly at Queens Road Depot and then at Trafford Depot following transfer across the city.

All of the other withdrawn T68/T68As remain stored in Manchester although it is pretty unlikely that they will have any future other than for scrap value. It is still hoped that somewhere someone will try and preserve one of these trams which, although not the most attractive or practical trams for a Museum, have an important place in history being the
first of the new breed of trams in the UK. 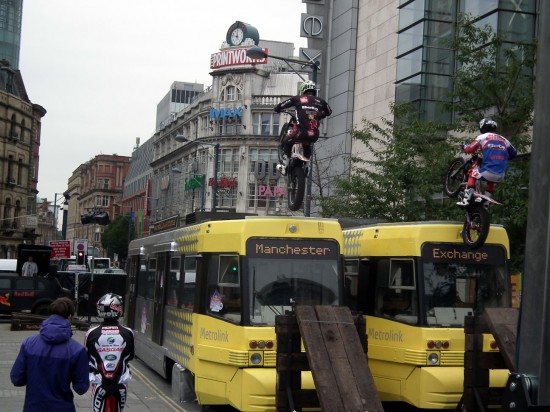 Not exactly how you would have imagined 1011's last action to be in Manchester is it? Bikers leap over the split tram. 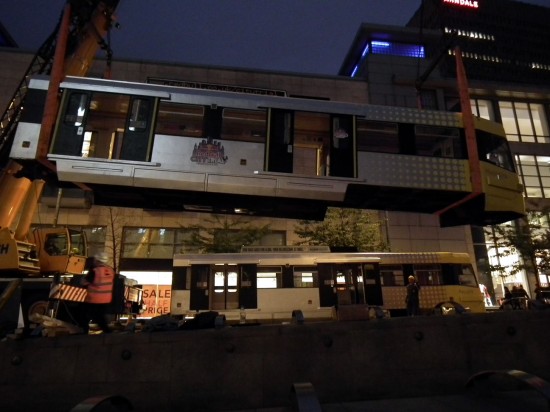 Half of 1011 leaves Manchester soil for the very last time as it is craned up for transport. 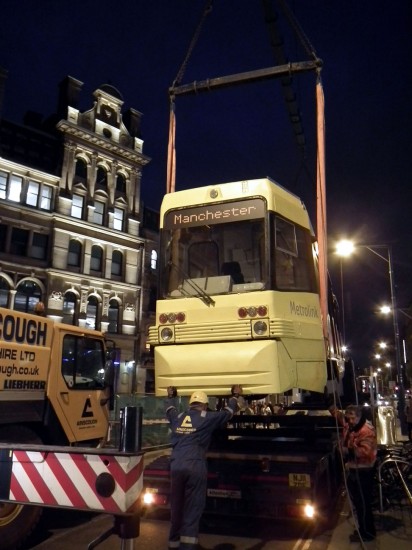 And gently she goes as it is lowered onto the waiting low loader for transport to Rotherham. (All photos: Steve Kemp)