In an unexpected but extremely welcome development, the Fleetwood Heritage Leisure Trust have announced plans to return their preserved Blackpool Jubilee car 761 to the Rigby Road tram depot, following a lengthy period of outside storage. Although it is believed that some negotiation will be required to finalise the deal, the owners of the tram are optimistic that it will be moved undercover shortly, thanks to the kind assistance of Blackpool Transport Services Ltd.

761 initially left Rigby Road shortly after it last ran at the end of the 2011 season, and has been stored in an industrial yard in Fleetwood for almost two years. However, a provisional agreement has now been reached between its owners and Blackpool Transport which will hopefully see 761 moved back home. The car will remain the property of the Fleetwood Heritage Leisure Trust and is not expected to operate in Blackpool, at least for the foreseeable future; however the move would undoubtedly be a positive one for the long-term preservation of this unique tram. As only two Jubilee cars were ever built and both are noticeably different, 761 is rightly considered the most valuable tram in the Trust’s collection, and therefore it would be fitting for it to be moved into more secure accommodation. Unfortunately, the car was known to be in a poor condition when it was finally withdrawn from service, emphasising the importance of getting it back indoors to prevent any further deterioration. The tram could also perhaps be displayed on Blundell Street during future heritage tram operating days, helping to promote the FHLT and allowing enthusiasts to admire this car again.

One of the main stumbling blocks is likely to be the high costs involved with transporting the massive tram back home, and with this in mind the Trust are offering for sale a 2014 calendar featuring images of Blackpool’s heritage trams, as well as 761 itself, to raise the required funds to move the tram. The new calendar, priced at £6.90, is available from a small number of outlets and more information can be found at http://visitfleetwood.co.uk/

It is sincerely hoped that 761 will find its way back to Blackpool in the near future, and both organisations involved are to be applauded for taking steps to work together and do what is best for the survival of this valuable tramcar. 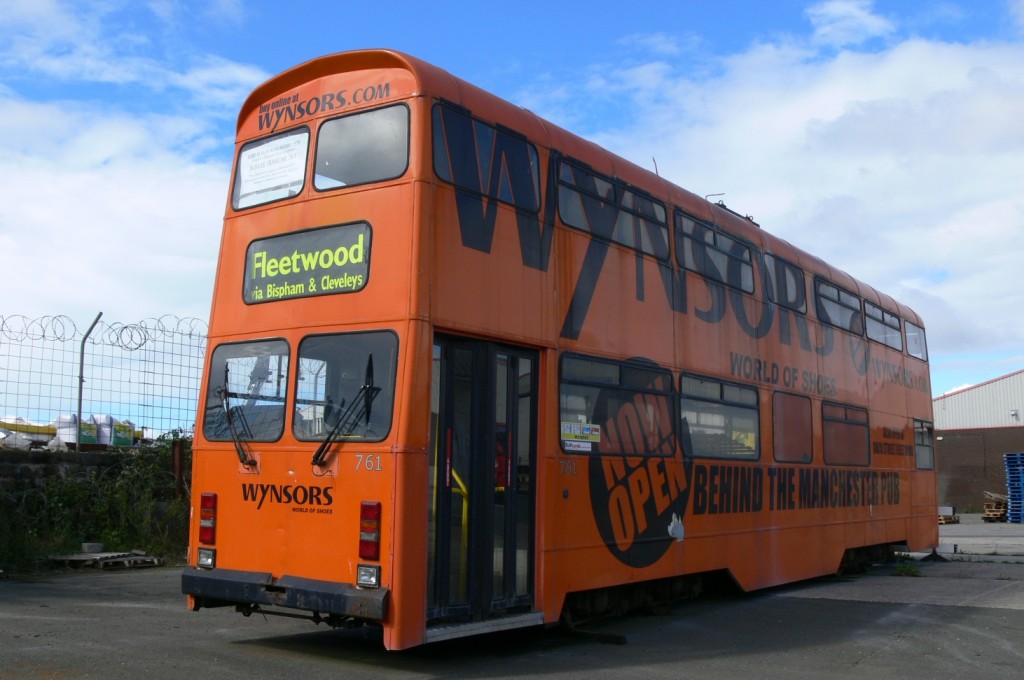 Jubilee car 761 seen in the industrial area which has been its home since November 2011. Once occupied by several trams, 761 is now the sole resident and hopefully it too will soon be moving to alternative, and more suitable premises. (Photo by Tom P)

11 Responses to Blackpool Jubilee car to return to Rigby Road?