Posted on Sunday 3 July 2022 by Gareth Prior

In this edition of “Trams &” we take a trip into the Town at Beamish where Gateshead 10 is pulling up to the stop and finds a steam lorry alongside.

In this photo we see Gateshead 10 in the days before it became Grimsby & Immingham 26 arriving in the Town with the driver just preparing to bring it to a stop to allow passengers to alight and others then to replace them on this almost always busy tram service around the museum. This is 3rd September 2011 with the tram being painted green as 26 the following year, a condition it retains today while under overhaul.

Alongside the tram is a Foden Steam Tractor. Named Cestria and with the reg plate of BUP 71 this road vehicle is in the livery of H.P.Thompson & Son of Chester-le-Street and is a regular exhibit at Beamish events. 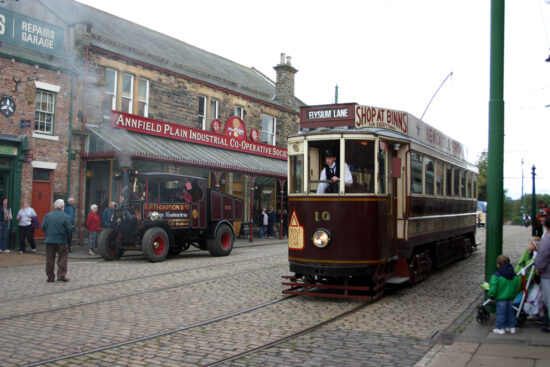