On Friday 19th July, Blackpool Balloon 708 finally left the East Lancashire Railway bound for a new home at the North East Land, Sea & Air Museum near Sunderland. As has been reported previously, the tram has been placed on long-term loan to the North Eastern Electrical Traction Trust by its owners, the Manchester Transport Museum Society, and is eventually hoped that it will be fully restored at the North East.

708 has had a rather bumpy ride since first entering preservation. Originally acquired by the Lancastrian Transport Trust, it was later exchanged with sister car 704 and ended up in the care of the MTMS. The tram left Blackpool late in 2011 and initially headed for Bolton, before heading to Bury where it has been stored for more than a year. Since being acquired by the MTMS however, 708‘s ultimate role has never been particularly clear: despite suggestions that the tram could be a long-term restoration project, it has also been hinted at various times that it could be used to provide spare parts for the group’s other Blackpool trams. It is therefore very pleasing that the car has now moved to Sunderland, and although the tram will stand outside for the time being, it shouldn’t be too long before the tram can be housed undercover for the first time since it left Blackpool.

Although 708 is missing several windows and its paintwork, which dates back to 1999, looks extremely shabby, the car’s structural condition appears to be surprisingly good and it is reportedly one of relatively few Blackpool trams in outside storage that doesn’t leak! This is rather ironic as the tram is eventually destined to be restored back to its original open top condition as ‘Luxury Dreadnough’ 245. This will be a completely unique tram in preservation, and has potential to be one of the most attractive and valuable of the many Blackpool cars now housed in various museums across the country. This will obviously be a big project and is likely to require external funding, but one day an original specification open top Balloon car will hopefully be available for use, both in the North East and at Heaton Park.

Following a few delays, 708 finally expected to arrive at its new home in the early hours on July 20th and was then unloaded onto a short length of track alongside sister car 721 by around 7:00am. Both trams and various others will be on display for NELSAM’s tram event on Sunday 11th August, which will offer the perfect opportunity to have a good look at 708 – a tram which few people have been able to see properly since it last carried passengers way back in 2004. 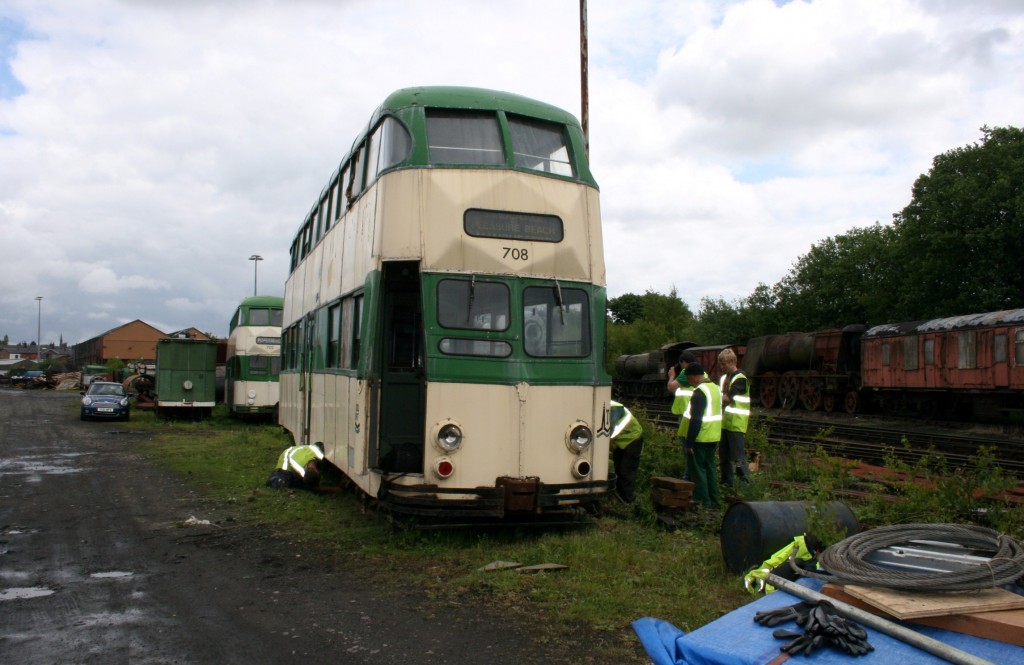 A few weeks ago, some MTMS volunteers visited 708 at Bury to reposition it slightly ahead of the planned move, as shown. Note 702 and 752 in the background. 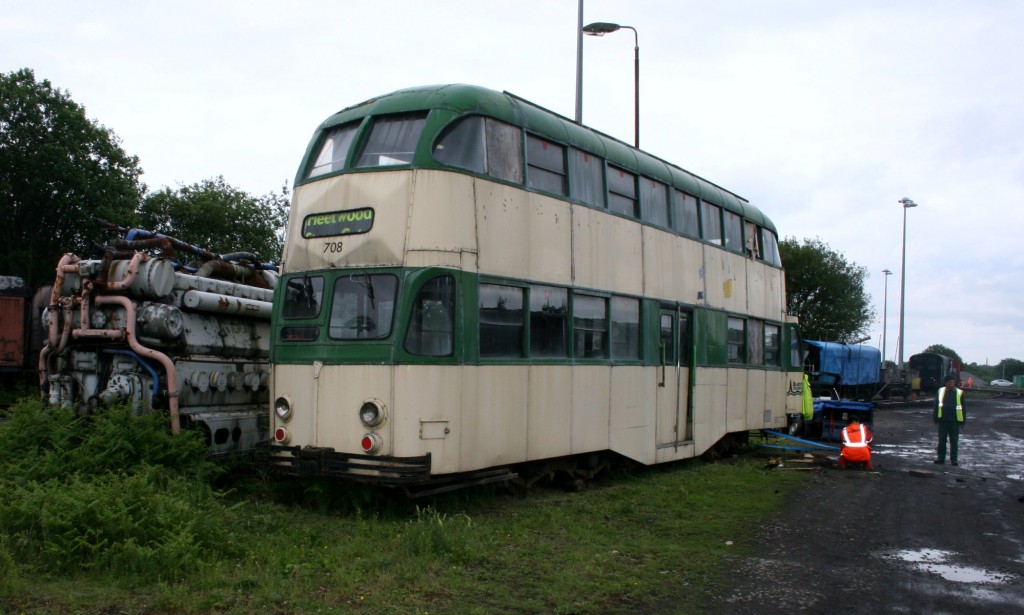 Another view of 708 at Bury from a few weeks before it left for Sunderland. (Both photos by Joe Savage) 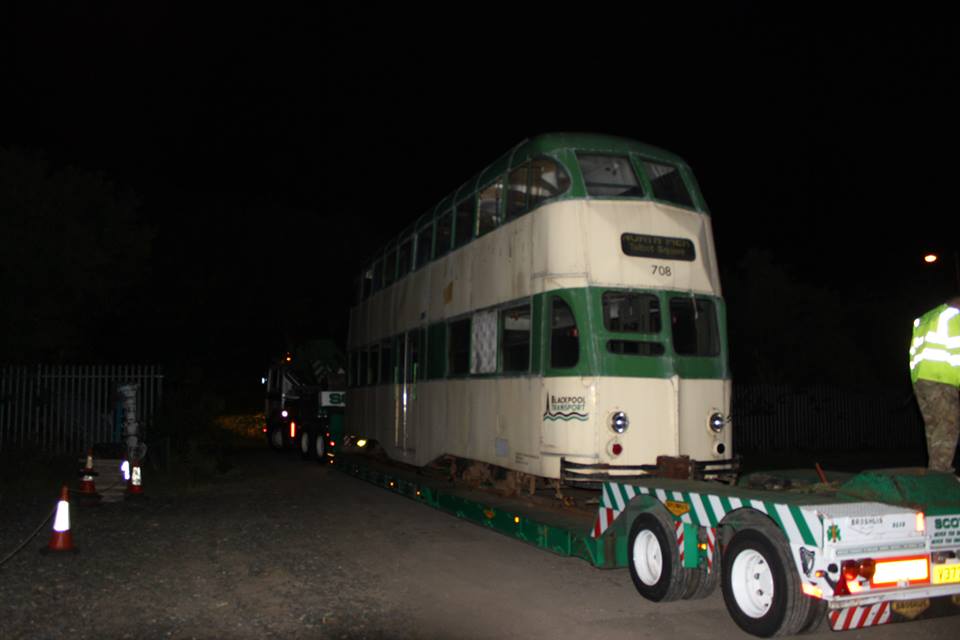 A dramatic scene of 708's arrival at the NELSAM site in almost pitch black, very early on Saturday 20th July. 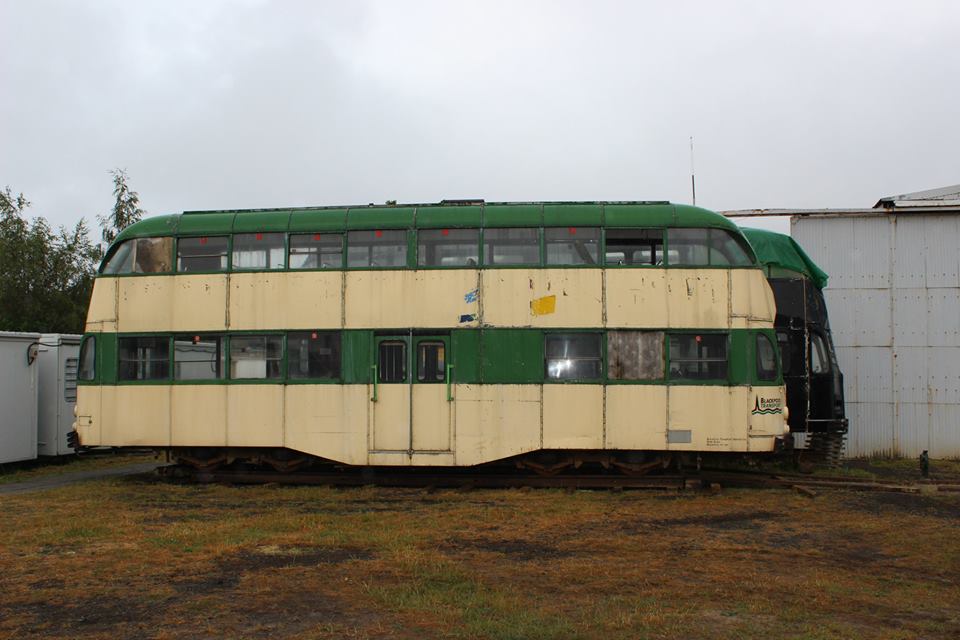 Our final view shows 708 in its new home at Sunderland, following the completion of unloading. (Photos courtesy of NEETT)