Police Box to be restored at Crich Tramway Village

Anyone who has ever visited the Crich Tramway Village has probably noticed the historic Metropolitan Police Box at Town End – usually when a child points and shouts “it’s the Tardis”! – and now the 1930s box is set to be restored thanks to support from Arts Council England.

The Grade II listed police box arrived at the museum in 1983 and was donated to Crich by the Metropolitan Police and transported from London. After having been in Derbyshire for almost 40 years the time has now come for a full restoration to take place, as despite repairs having been completed in the past its concrete body has been deteriorating and requires specialist repairs.

Kate Watts, Crich Tramway Village Curator, said: “Whilst Crich Tramway Village is obviously known for its trams, we also have a significant collection of street furniture items, which are also historically important. We’re glad to be giving the police box the attention it needs to preserve it for years to come. We believe this is the last remaining example of the iconic MK2 design, so it’s vital that we preserve it. If anyone knows of any others, we’d love to hear from them!”

Although there is funding from Arts Council England, the Museum needs to find a further £4000 and is welcoming any contributions towards this. Any donations can be made at https://www.tramway.co.uk/contact/make-a-donation/ 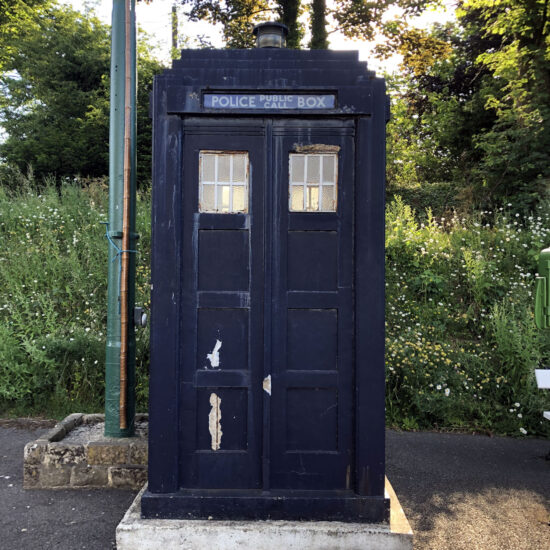 The Police Box waiting at Town End. It will now be restored to its former glory. (Photograph courtesy of Crich Tramway Village)