Posted on Wednesday 22 June 2022 by Gareth Prior

John Bull, Crich’s steam tram engine, went on a brief visit to the Welshpool and Llanfair Light Railway last month for the “Beyer Bash” event which saw various historic vehicles constructed by the former Beyer, Peacock works on display and in operation at the museum. This was John Bull’s first trip away from Crich since 2009 and marked the first time it had been to Wales in its almost 140 year history!

The “Beyer Bash” took place at the Welshpool and Llanfair Light Railway from 20th to 22nd May and was arranged to celebrate the 120th anniversary of the railway’s two original locomotives, The Earl and The Countess. With both these locos having been built by Beyer, Peacock what better way to celebrate the occasion than to get a small gathering of locos of all shapes and gauges constructed by the same firm?

John Bull – built in 1885 for the New South Wales Government but soon found to be unsuitable and returned to Gorton Works by 1890 where it was used as a shunter until 1959 when it was withdrawn – has been part of the Tramway Museum Society collection at Crich since 1962. It has seen limited operation over the years with its most high profile running being at Blackpool during the 1985 Tramway Centenary celebrations. It is now confined to static display, usually in the Great Exhibition Hall but did escape to the Manchester Museum of Transport in 2009 and now to Welshpool in 2022.

John Bull was not the only visitor to the railway for the event. This included the loan of a steam locomotive from the Isle of Man Steam Railway with no.8 Fenella having made the trip across, this was an incredibly rare opportunity to see a resident Isle of Man locomotive in the UK (although they have made trips for attention these have been out the public gaze). Also visiting the event were K1 (a Garratt locomotive from Statfold Barn) and 1827 (another former shunter at Gorton Works).

Since its time on display John Bull has returned to Crich where it will be again be viewable in the Great Exhibition Hall when Crich fully reopens. 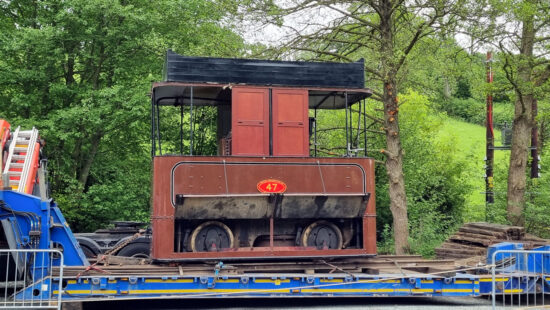 With its bogies exposed, John Bull was displayed on the back of a lorry throughout the event. 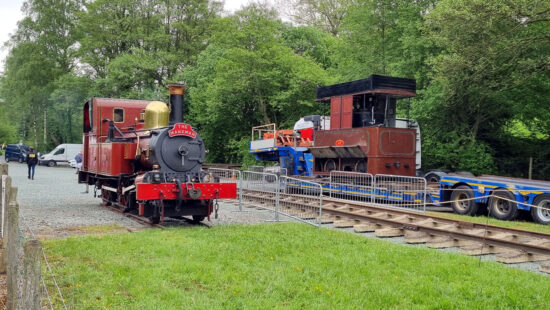 No. 8 Fenella – visiting all the way from the Isle of Man – posed on a short-section of track alongside John Bull. 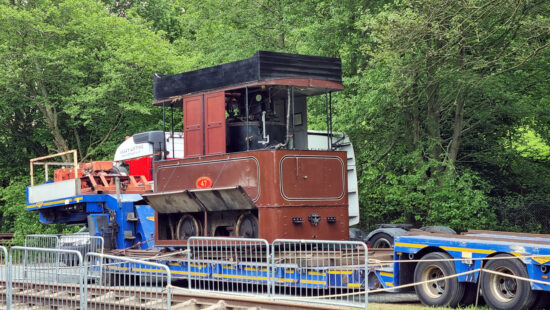 Another shot of John Bull. 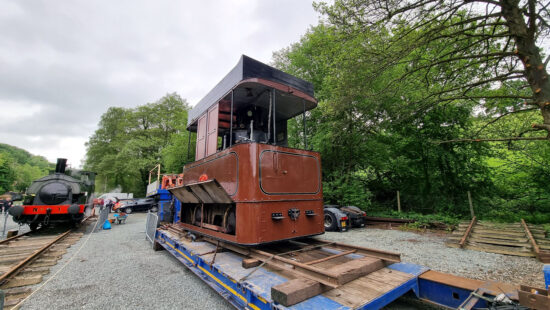 John Bull was also able to meet an old friend with 1827 visiting. Both these locos were used as shunters at Gorton Works. (All Photographs by John Whitehouse, 21st May 2022)