Today sees the East Anglia Transport Museum mark 50 years of opening with a special event to commemorate the occasion. It is also the 50th anniversary of tram operation with a simple service running on that first day back in 1972 although regular trolleybus operation wouldn’t follow until a few years later.

An almost constant over the past 50 years of tramway operation has been Blackpool Standard 159 and, as we saw last week, this tram has recently returned to service after works attention over the winter which included the refitting of its overhauled motors. Its is one of four operational trams currently available to the museum – the others being Amsterdam 474, Sheffield 513 and London Transport 1858.

Since opening in 1972 the museum has gone from strength to strength and now boasts a tramway into the woods, a trolleybus circuit and the East Suffolk Light Railway. And that’s not where things will end as recently acquired land adjacent to the current museum site will be developed over the next three years – and this will include an extended tramway route as well as a new tram depot as well as developments for the trolleybuses and railway.

By the time you probably read this article the 50th anniversary celebration event will be underway and subject to availability it is hoped that three trams will be running. These should be 159, 513 and 1858. In addition there will be trolleybuses, buses and the East Suffolk Light Railway in operation. If you’re in the area and at a loose end why not put down to the museum today (Sunday 29th May) to help the museum celebrate their 50th anniversary. 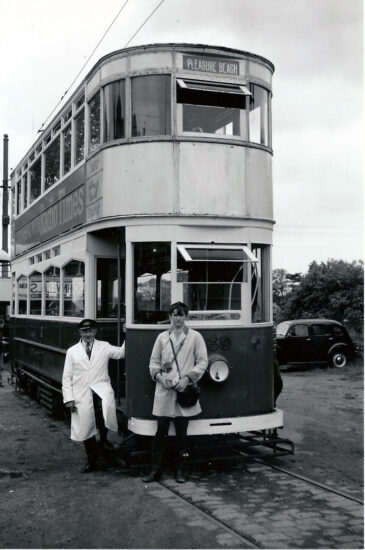 159 waits departure from the then single track Chapel Road terminus. James C Malster is the driver for the first trip with Paul Burgess as conductor. Jim Malster was a former tram and trolleybus driver with London Transport and taught the art of driving to members of the museum to allow services to commence. (Photograph by George Moon courtesy of Tim Major)