The old and the new are now connected in Edinburgh with the tracklaying on the Trams to Newhaven project now having reached the rail in York Place of what we can now call the first phase of the Edinburgh Trams network. This significant milestone means that there are now just a few sections where the track still need to be laid as we continue to look ahead to spring 2023 and the opening of the extension.

The tracks which had been laid at the top of Leith Walk now curve round into Picardy Place and connect with the old tracks in York Place, though the concrete infill is still be poured. This significant milestone means that there are now only four sections where track is still to go down. These are at the bottom of Leith Walk across Duke Street, one across Queen Charlotte Street, one on Melville Drive and one longer gap along Ocean Drive between Tower Place and Rennie’s Isle.

Whilst there is more work to be completed aside from the tracklaying the fact there are just those four sections to go shows how much progress has now bee made in the construction of the extension. 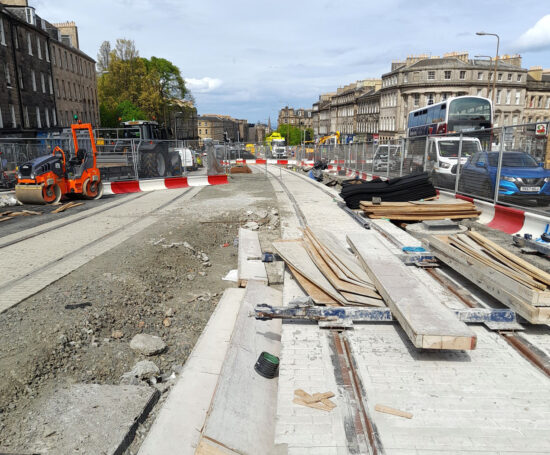 Looking north from the top of Leith Walk, the new tracks now extend to the bottom of Leith Walk with most of the centre traction poles in place.

Looking in the other direction from the same spot, the new tracks now curve to the right into Picardy Place and on to York Place to connect with the old tracks of the original phase of the tramway. The new is connected to the old! Photography is difficult at this point since the worksite has busy traffic lanes on both sides. (Both Photographs by John Hampton, 12th May 2022)