Around the World in Trams: Stockholm 521

Posted on Saturday 30 April 2022 by Gareth Prior

We move on with “Around the World in Trams” as for the next few weeks we head to Sweden and the city of Stockholm.

The tram network in Stockholm runs on standard gauge tracks and can trace its history back to 1877 when the first horse tram routes opened. The last horse trams ran in 1905 but four years previously electric tram services were inaugurated. The network reached its biggest in 1946 but then in the 1950s and 1960s much of the network became part of the Stockholm Metro and then in 1967 the last sections of the inner city tramway closed. There did remain trams running but these were restricted to feeder services to the Metro. Things started to change from 1991 when a heritage line opened and then from 2000 when a modern tram system with articulated vehicles started to open.

This first view shows trailer car 521 being hauled through the streets on 23rd July 2010. This ASEA B11 trailer was built in 1936 and after withdrawal from service was donated to the Stockholm Tramway Museum, remaining operational. 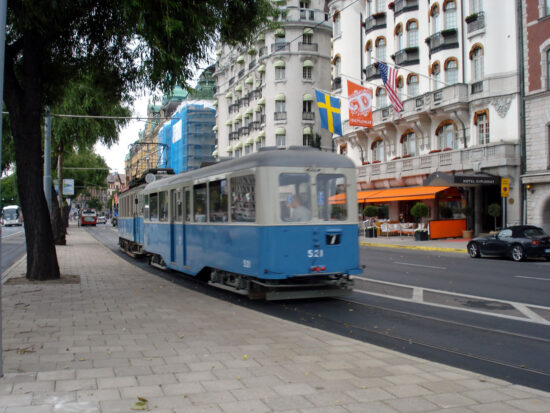 2 Responses to Around the World in Trams: Stockholm 521