Posted on Wednesday 27 April 2022 by Gareth Prior

Network Rail signalling problems around Rotherham on Monday 25th April meant the Stagecoach Supertram operated Tram-Train service to Rotherham Parkgate was disrupted. As is often the case when it isn’t possible to access the line via the Tinsley Chord the Tram-Train service was diverted to Meadowhall – with the destination displays on the Citylink vehicles displaying the service as being on the Yellow route.

The disruption for the Tram-Train service on this date was over relatively quickly, but the same can’t be said for services on the Blue route as there still remain no trams able to run to Halfway with the ongoing overhead repairs yet to be completed.

In a statement from 20th April, they said: “Following recent issues with the overhead power lines, we have identified that some repair work is needed to part of the overhead line equipment to prevent further issues and improve the reliability of our services. We are working with our suppliers to source the parts to complete this repair work as quickly as possible, however we are currently expecting the Blue route between Halfway and Beighton Drakehouse to remain closed until at least Friday 6 May.” 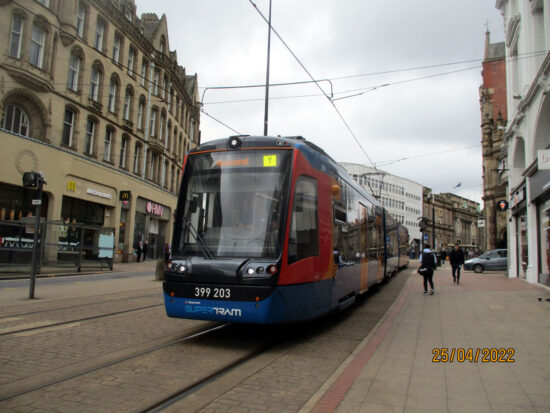 399 203 is unable to operate on the complete Yellow route (its wheel profiles for the Tram-Train service mean that it can only run as far as Shalesmoor) so to see it have the Yellow route colour on its destination display is fairly unique. Its seen here departing Cathedral for Meadowhall. 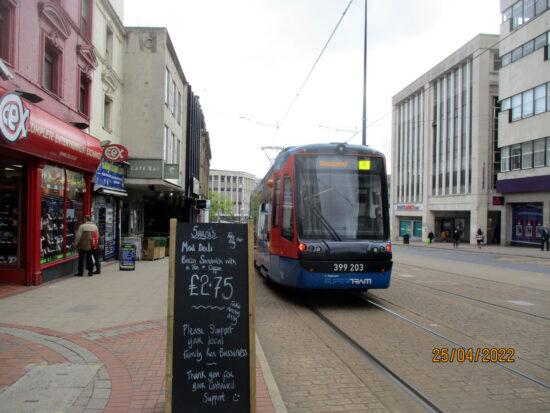 £2.75 for a bacon sandwich with tea or coffee anyone? 399 203 heads away towards Castle Square with a service to Meadowhall during the Tram-Train disruption. (Both Photographs by Stuart Cooke, 25th April 2022)