Cardiff water car 131‘s extended seaside holiday has finally come to an end. The tram left Blackpool early in the afternoon on Friday 23rd March, bound for its usual home at Crich Tramway Village. Regular readers will remember that the works car had been borrowed by Blackpool Council to assist with cleaning the track between Starr Gate and Pleasure Beach. It arrived at Blackpool on 7th November 2011 and was then used for its intended purpose along New South Promenade on 9th & 10th November.

Suggestions that 131 might be used for rail scrubbing purposes on other sections of the tramway ultimately failed to materialise, and following a lengthy period of storage inside the Starr Gate depot, its owners duly made arrangements for it to return to Crich. However, there was one last surprise in store as, on March 23rd, Cardiff 131 emerged onto the promenade for one last time. Following a brief shunting exercise at Starr Gate, the car was driven north by visiting members of the Crich workshop team – but unlike its previous outings, when it stopped just south of Pleasure Beach, the car continued further north and made it all the way to Tower! There, the tram was posed for an unrepeatable photo opportunity for the benefit of the TMS representatives who were present. For unknown reasons, the event was top secret but as is so often the case at Blackpool, a few enthusiasts managed to find out what was planned and were present to capture the unusual scene on camera, much to the surprise of the team from Crich!

Once photos had been taken, the water car used the crossover at Tower to head back south towards Manchester Square, where it surprisingly ran down Lytham Road and Hopton Road. The familiar Scott’s lorry was already waiting for the tram on Blundell Street and, after the trolley was tied down and the lifeguards prepared, the car was loaded and left Blackpool at around lunchtime, bringing to an end another remarkable period in the history of this increasingly famous and much-travelled tram.

131‘s visit to Blackpool was notable for a number of reasons. It was of course the first Welsh tram ever to run there, and only the second time that a non-passenger car had been loaned to Blackpool (the steam tram engine from Crich being the first in 1985). Despite hardly being used during its time there, it was also the longest operating loan period of any TMS-owned tram apart from Fleetwood Box 40, since the Gateshead garden festival in 1990! Finally, Cardiff 131 will almost certainly go down in history as the last tram ever to operate in Blackpool without transponder equipment.

131 has been a familiar sight on Scott’s lorries in the last few years having been loaded no less than six times in just under five years! As well as its recent holdiay, Scott’s Heavy Haulage moved it from Clay Cross to Crich for restoration in 2007, and then to Beamish and back in 2010. The car was also placed on a low-loader for a very short journey along the period street at Crich when its arrival at the site was re-enacted for its launch ceremony in May 2009. The tram is now expected to settle down into normal use back home, although with this particular tram it would be unwise to rule out the possibility of any more adventures!

Our grateful thanks go to our regular Contributing Photographer, Andrew Blood, for the pictures of 131 shown below. 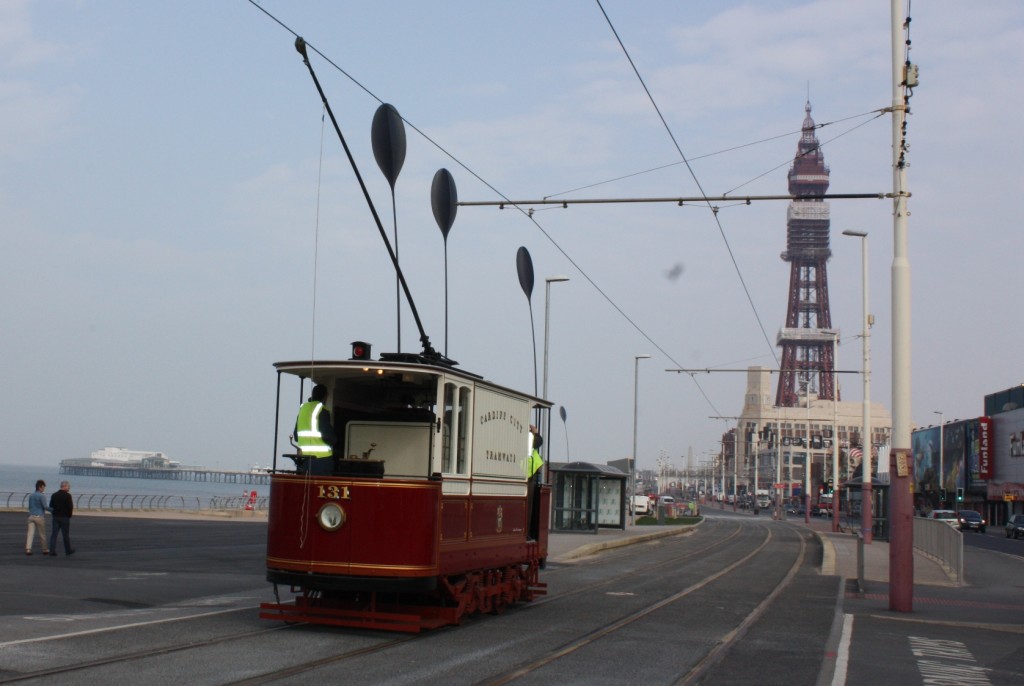 A unique scene with Cardiff 131 and two of Blackpool's most iconic landmarks as the tram trundles along a semi-deserted promenade. (Photo by Andrew Blood) 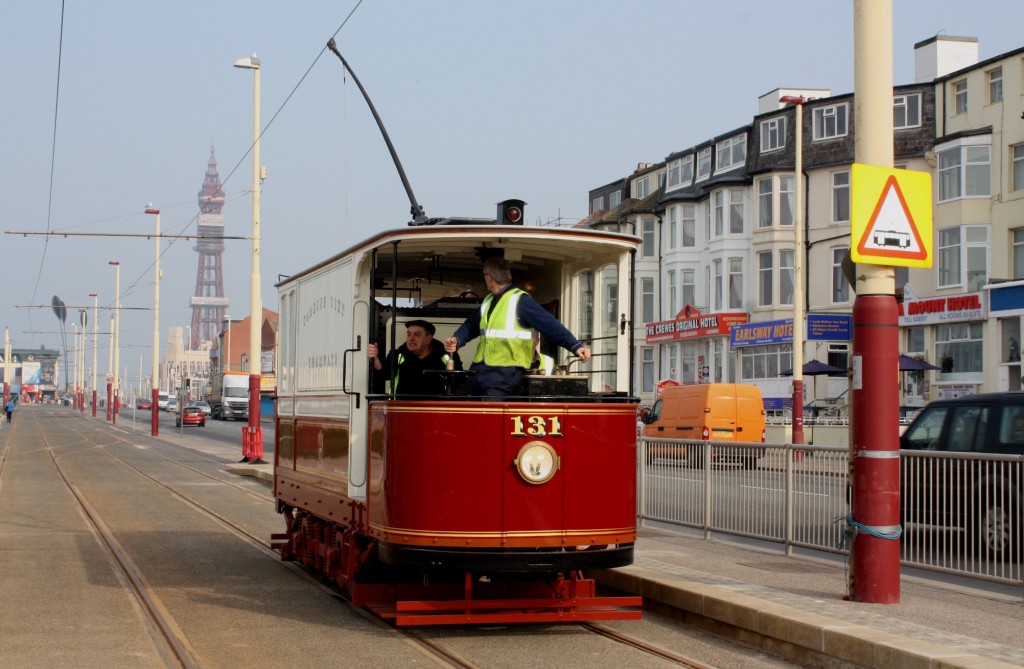 With the Tower behind it, 131 heads for Rigby Road depot for the first - and last! - time on March 23rd. (Photo by Andrew Blood) 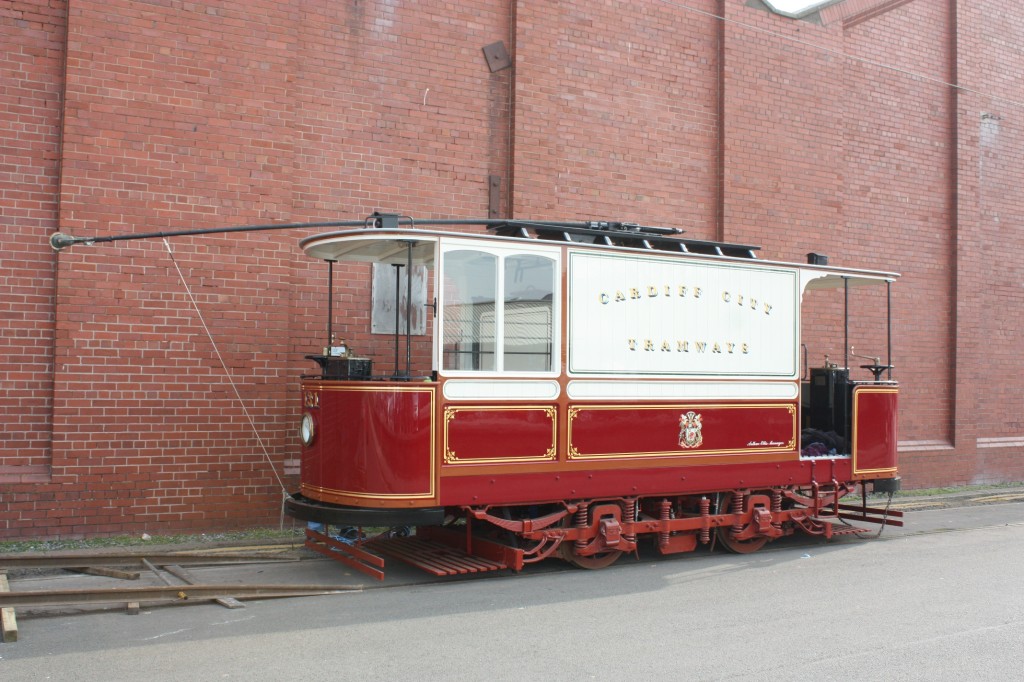 Cardiff 131 seen on Blundell Street, about to be loaded up for the trip back to Crich. (Photo by Andrew Blood) 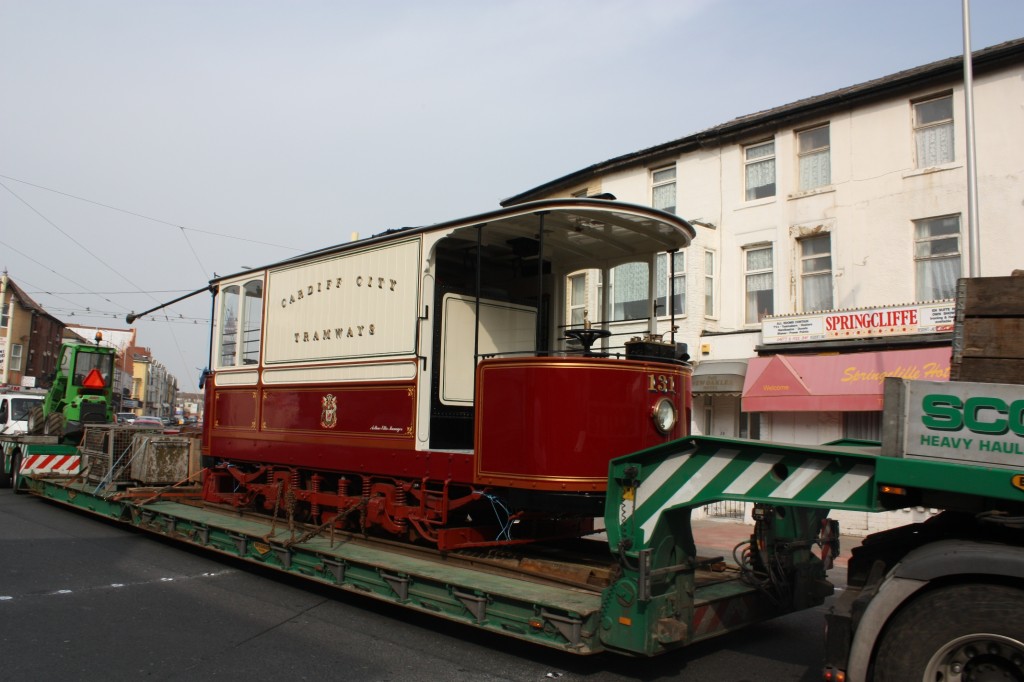 Cardiff 131's time in Blackpool finally comes to an end as the tram heads down Lytham Road for the long journey home. (Photo by Andrew Blood)