Out and About: A wet day in Edinburgh

Posted on Saturday 5 February 2022 by Gareth Prior

In this edition of “Out and About” we are back in the Scottish capital on a wet last day of 2021. 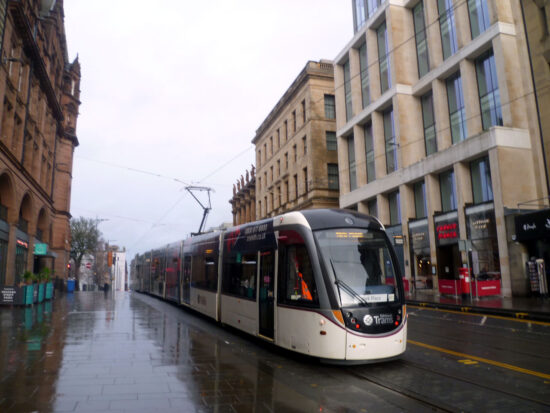 Judging by the rain soaked pavements in this view its probably just as well the main Hogmanay celebrations in Edinburgh were cancelled again in 2021. This is 256 ascending the slope on South Saint Andrew Street towards the stop at St Andrew Square and then on to York Place. To the left is the former Prudential building while the middle of the three buildings on the right is The Edinburgh Grand (originally built as the National Bank of Scotland HQ in the late 1930s). The furthest away of the three buildings on the right is about to open as a hotel (the Gleneagles Townhouse, a new city venture for the Perthshire restort) and was originally the British Linen Bank. (Photograph by Roy Calderwood, 31st December 2021)