Out and About: Haymarket in Edinburgh

Posted on Sunday 23 January 2022 by Gareth Prior

We have another edition of “Out and About” today as we are again in Edinburgh and feature a tram with the backdrop of more development work. 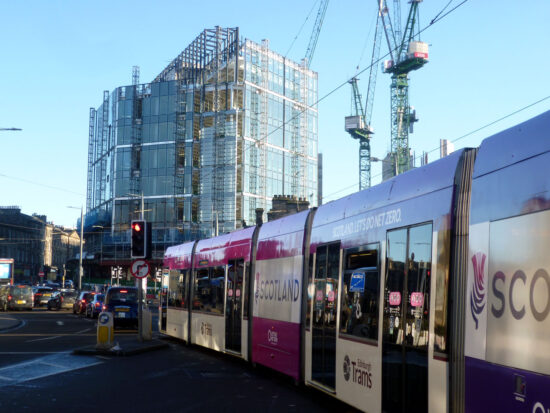 One thing that most city centres across the British Isles have in common is that there is a backdrop of major developments and Edinburgh is no different. In this photo we see 269 – advert for Scotland. Let’s do net zero. – waiting for the traffic to clear ahead having just departed from Haymarket (out of sight to the right). The development seen ahead of the tram is the Haymarket Edinburgh redevelopment site which lies above Network Rail’s Haymarket tunnels linking Haymarket and Waverley stations. This site is the former Caledonian Railway (later LMS and then BR) Morrison Street Goods Depot which closed in 1966 which since then has mainly been used as a car park and has waited over 50 years to find a new use! 1 Haymarket Square (seen here) will be joined by two other buildings and a hotel. (Photograph by Roy Calderwood, 18th December 2021)