Posted on Thursday 20 January 2022 by Gareth Prior

Work on the Trams to Newhaven project in Edinburgh has now resumed after the Christmas and New Year shutdown and one area which has seen an extension of the worksite during January is that closest to the current line from London Street to York Place. The site has been extended across the Broughton Street/Picardy Place junction which has seen a number of road closures and bus diversions put into place.

Lothian Buses had to put in extensive diversions on their routes through the area but with very heavy traffic during the working day on York Place additional diversions have now had to be introduced at certain times of the day to ensure they can get through the area.

This is the second of three phases of work to take place in this area and is due to last 16 weeks until around May 2022. The final phase will see the York Place tramstop closed with trams from Edinburgh Airport terminating at St Andrew Square from point on. York Place stop won’t be reopened as it is due to replaced by a stop in Picardy Place as part of the extension project. 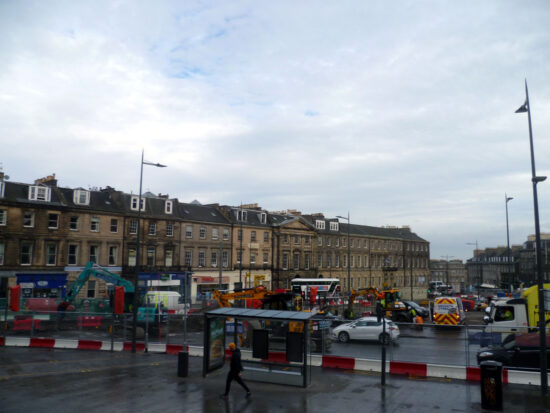 In this photo we are looking northeast over the site from the top of the steps of St. Mary’s Catholic Cathedral. The Lothian double decker in the middle distance is passing the site of the tramstop which will just be on this side of the bus. The bus is in a slow moving single lane of eastbound traffic coming off York Place and Broughton Street (both off to the left of the picture). The road surface had already been removed on the closed westbound lane at the York Place/Broughton Street intersection. (Photograph by Roy Calderwood, 18th January 2022)