Posted on Thursday 13 January 2022 by Gareth Prior

45 has become the fifth of the new Urbos 100 trams to enter service on the West Midlands Metro – being used in service for the first time on Thursday 13th January 2022. 45 follows on from 38, 39, 40 and 42 which all entered service during December.

45 is actually the last of the Urbos 100s to have been delivered to the West Midlands so far (a further 13 are due to follow by 2023) with it arriving at Wednesbury Depot on 10th November 2021. This makes it the quickest CAF built tram – including the original Urbos3s – to carry passengers following its delivery coming in at just over two months (the previous quickest was 25 which was delivered on 24th June 2014 and accepted for service on 3rd September 2014).

Since arrival 45 has been seen on testing and fault free mileage accumulation and with this work now completed it was cleared to join the operational fleet which it duly did on 13th January 2022.

45 is the first new tram to enter service since 18th December 2021 with the service continuing to only run between Wolverhampton St George’s and Bull Street. 10 trams are usually required to maintain the reduced service although on occasions recently only seven have been in action with no “new” Urbos3s having returned to action after their repairs for several weeks either. There is no word on when the service may be extended further into Birmingham (let alone when extensions may be opened – with work still required on their construction anyway). 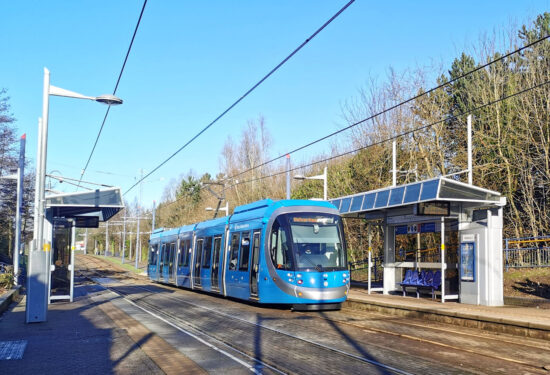 45 pulls into Priestfield on its debut day.

Another view of 45 at Priestfield. Its heading to Birmingham despite what its destination display says! (Both Photographs by Andy Walters, 13th January 2022)