Centenary 643 looking for a new home

Posted on Friday 7 January 2022 by Gareth Prior

Following the upgrading of the Blackpool Tramway many of the traditional trams were sold on for further use and this included three which have since found new homes at schools. But that number is set to reduce as Centenary 643 is now looking for a new home with it deemed surplus to requirements at Brooke School in Rugby where it has been for just over five years.

643 last ran in Blackpool on 6th November 2011 (the last of traditional tram operation) when it was  a late replacement in service for failed sister 645. It was subsequently sold to the Broadwater Caravan Park with its relatively short move there taking place on 13th January 2012. The tram was repainted into an attractive cream and green livery whilst at the Caravan Park and also received some internal changes including a small kitchen area being added. It only remained at the Caravan Park until February 2014 when it was moved to join the Fleetwood Heritage Leisure Trust’s trams at Wyre Dock.

Its stay in Fleetwood wasn’t to for long though as in July 2016 it left the northwest coast for the first time since original delivery in 1986. Initially moving to the Midlands for further conversion work, its eventual destination would be Brooke School in Rugby, a school that caters for children aged 1-19 with autism, physical disabilities, medical needs and learning difficulties.

Retaining the cream and green livery – with the addition of Blackpool Transport logos and “Vs” on the end – the tram became the centre piece of a new area at the school featuring a beach and palm trees. The tram was also converted for use as a classroom although it kept a number of original features including destination blinds. 643 was donated to the school by Colas Rail who undertook the conversion work on the tram.

But now with the tram having served its new role since around October 2016 its time in Warwickshire has come to an end as developments at the school mean they no longer have use for it.

Brooke School are open to hearing from anyone who would be interested in taking the tram on. If you have serious interest in the tram please contact us through the usual channels and we will pass your details on directly to the school.

And what of the other trams at schools? They are Brush Car 622 at Anchorsholme Academy and Twin Trailer Car 687 at Rossall School. 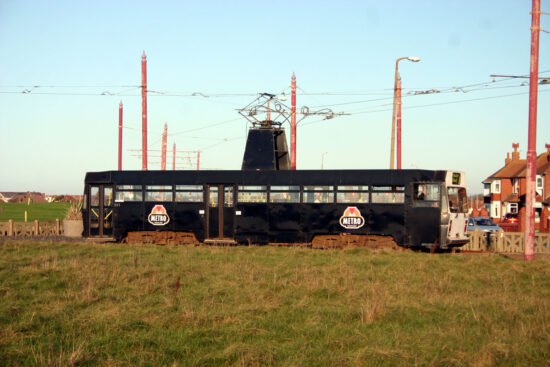 Last day of service for 643 as it leaves Little Bispham loop on 6th November 2011. (Photograph by Gareth Prior)